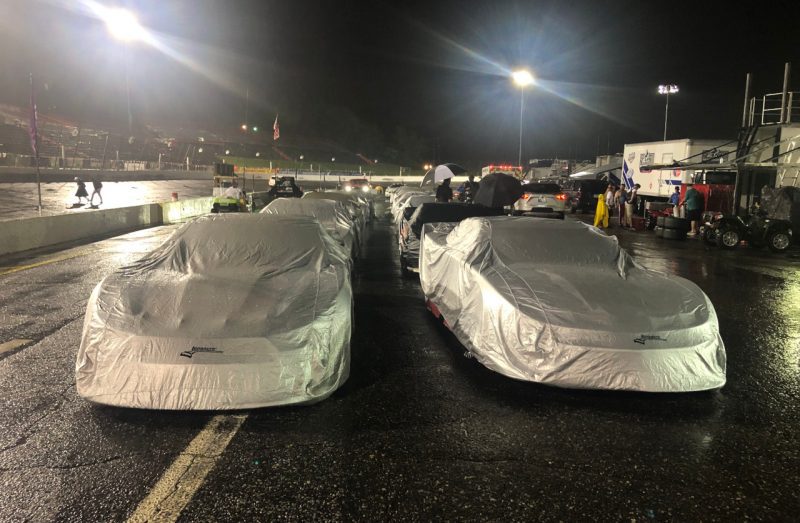 A persistent rain shower that started moments after the conclusion of the 100-lap Solid Rock Carriers CARS Pro Late Model Tour feature, which was won by William Sawalich, quickly turned into a torrential downpour, which resulted in the postponement of the Late Model Stock race.

With the unfavorable weather conditions continuing into Sunday evening, CARS Tour owner Jack McNelly and Hickory made the decision to hold the rest of the Throwback 276 on Friday evening.

The CARS LMSC Tour’s return to Hickory on Friday will play out as a one-day show.

No practice is scheduled to take place before the green flag flies for the 138-lap race. The starting grid for the feature will remain the same following time trials on Saturday evening, with Connor Hall maintaining his pole position in a scheme honoring the late Dick Trickle.

For spectators, any tickets purchased for the Throwback 276 are good for the rescheduled LMSC Tour race, along with pit passes. However, fans must have those items available when they return to the track, otherwise they will not receive free admission.

While McNelly understands that not every single drive in the 32-car field will be able to make the grid due to other commitments, he hopes that both fans and drivers come out in full force to see who will add their names to a list of Throwback 276 winners that include Josh Berry, Justin T. Carroll and Ryan Repko.

The only person who departed Hickory somewhat satisfied on Saturday evening was William Sawalich.

By leading every single lap from the drop of the green flag for the third time in the 2022 CARS PLM Tour season, Sawalich continues an efficient stretch of races that also includes two victories driving a Super Late Model for Donnie Wilson.

“This feels super good,” Sawalich said. “Momentum is key right now and I can’t thank Setzer Racing Development for all their hard work on that car. It’s super cool to win in the special Orange Blossom paint scheme.”

Having that quality seat time with Wilson’s operation is something that Sawalich believes has only bolstered his development over the past couple of months, adding that he was eager to return to Setzer’s Pro Late Model after defeating Super Late Model standouts in Bubba Pollard and Stephen Nasse the previous weekend at Five Flags Speedway.

Driving the Orange Blossom Special colors that Dennis Setzer took to Victory Lane so many times in his career, Sawalich’s only real challenge came on the restarts from Caden Kvapil, who ended up fading to ninth in the final running order after suffering a mechanical issue in the closing laps.

Even though he missed the Puryear Tank Lines 225 at Greenville-Pickens Speedway, Sawalich is optimistic that he can still chase down Kvapil and Luke Fenhaus for the PLM Tour title, but said that efficiency will be imperative over the remaining six events to accomplish that goal.

“If we keep winning, I think we can get back in the points hunt,” Sawalich said. “That’d be a great situation, but we just have to stay consistent in qualifying and during the race.”

Additional details regarding the conclusion of the Throwback 276 will be announced later in the week.