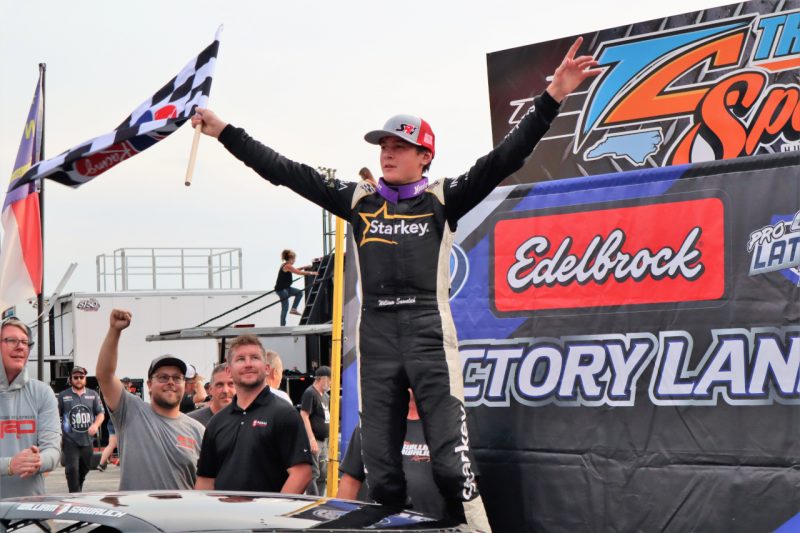 William Sawalich is gradually transforming into one of the most promising young prospects in the United States.

Only two weeks after winning his first career Super Late Model race at Montgomery Motor Speedway, Sawalich enjoyed a flawless evening in the CARS Pro Late Model Tour feature of the Keen Parts 200 at Tri-County Motor Speedway for his second win in the series.

With the win, Sawalich becomes the first repeat winner in the inaugural CARS PLM Tour season and continued to showcase the wealth of knowledge he absorbed from having short track veterans Dennis and Brandon Setzer guiding him through the development process.

Despite winning the pole that night, Sawalich’s evening ended after 80 laps when he was unable to avoid a late crash, but the 15-year-old returned to Tri-County on Saturday with a much better idea on what was needed to come away with a victory.

“I just paced myself good,” Sawalich said. “I’m fortunate that I got a great car from Dennis and Brandon Setzer. I ran my race, and even though I had a mistake on [a late] restart, I came back from that well. All in all, it was a good evening.”

The main goal Sawalich established for himself in 2022 was to accumulate as much track time as possible regardless of the car.

Competing against other talented drivers like Bubba Pollard, Matt Craig, Luke Fenhaus and many others has only served to bolster Sawalich’s confidence in himself as he gradually figures out more information on how to conserve his equipment for the end of the race.

Although Sawalich is out of the CARS PLM Tour points battle after skipping the Puryear Tank Lines 225 at Greenville-Pickens Speedway, Sawalich is only focused on winning every single race in the series moving forward as he continues to gain more opportunities in Super Late Models and Late Model Stock Cars.

“Hopefully we can just keep the momentum going,” Sawalich said.

The only driver who came close to challenging William Sawalich for the win in Saturday’s Keen Parts 200 at Tri-County Motor Speedway was Giovanni Ruggiero.

On the final restart, Ruggiero did everything possible to hold the bottom alongside Sawalich and take control of the race, but he ended up settling for a solid second place finish despite not having the car to his liking through all 100 laps.

“We fought a really tight race car the whole race,” Ruggiero said. “This shows that you should never give up. We kept digging and trucking the whole race and I can’t thank everyone who made it possible for me to be here.”

Ruggiero’s second place finish continued what has been a great 2022 for him so far.

After opening the year with a win in the World Series of Asphalt’s Pro Late Model division at New Smyrna Speedway, Ruggiero made a statement in his CARS PLM Tour at Greenville-Pickens Speedway by leading every single lap before the race was prematurely ended by a power outage.

Ruggiero believes that many more dominant evenings like the one at Greenville-Pickens are ahead over the rest of 2022, but he and Anthony Campi Racing intend to carefully evaluate their notes from Tri-County so they can keep finding more speed in their cars.

“This is good momentum for us,” Ruggiero said. “Our goal every weekend moving forward is to finish inside the Top 3.”

The Orlando, Florida native fought hard to maintain track position inside the Top 5 and narrowly avoided disaster after contact with Katie Hettinger on a late restart. Noland’s efforts were rewarded with a third-place finish in his first CARS PLM Tour start.

“We really didn’t have much left at the end,” Noland said. “We started on the bottom way too many times but that’s how racing is. Trying to keep up on the bottom is what really caused us to burn this car up.”

Noland was one of a handful of drivers who entered the CARS PLM Tour feature of the Keen Parts 100 to gain experience prior to contesting 100 laps in the Southern Super Series race.

The past several years have seen Noland test his luck in many different forms of racing with starts in the NASCAR Camping World Truck Series, ARCA Menards Series and the now defunct CARS Super Late Model Tour, where he recorded tow Top 10s in eight career starts.

Noland was satisfied to come home third at Tri-County but knows that more work is needed for him to contend for victories and is eager to keep working with car owner Jesse Dutilly on correcting the weaknesses and maximizing his strengths.

If he can improve upon Saturday’s showing, Noland is confident that victories will start piling up in both Super Late Model and Pro Late Model competition.

Following an enthralling weekend at Tri-County made possible by Archie St. Hilaire, Tom and T.J. Keen, Sawalich and the rest of the CARS PLM Tour competitors will have two weeks to regroup for the series’ inaugural visit to the quarter-mile bullring of Wake County Speedway on July 9.