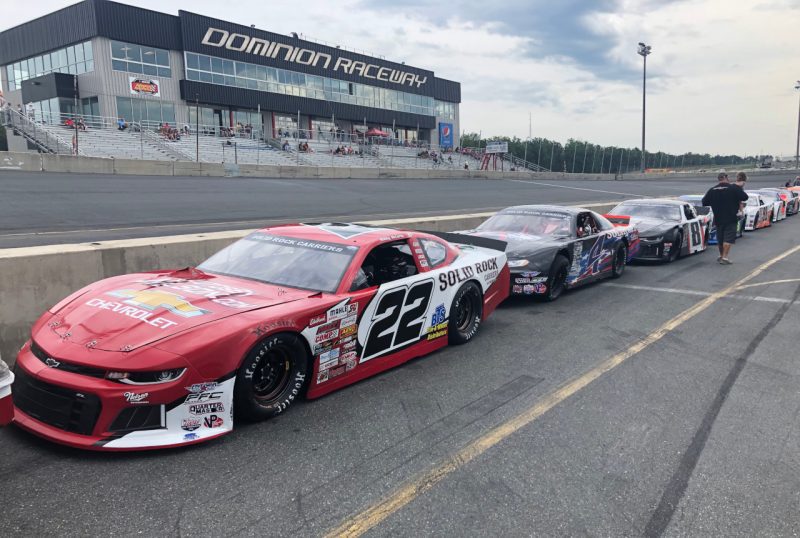 A new batch of local track favorites will look to continue the trend started by Queen against the CARS LMSC Tour regulars when the series heads to Dominion Raceway on Saturday evening for the Virginia is for Lovers 125.

Each CARS LMSC Tour race at Dominion has yielded a different winner. Kvapil enters Saturday’s 125-lap feature as the favorite to add his name to the list of drivers who have visited Dominion’s victory lane, but he faces stiff opposition from drivers who are looking to finally break through for a win in 2022.

Chad McCumbee hoping for consistency, good luck through the rest of 2022

Despite being second in the CARS LMSC Tour standings, Chad McCumbee still has significant ground to make up if he wants to catch Carson Kvapil.

Currently down 30 points to Kvapil, McCumbee knows that the cars provided by Robert Elliott are strong enough to contend for the championship, which is why the mechanical failure he suffered in the first few laps of the Old North State Nationals at Caraway Speedway grows more frustrating for him with every passing race.

“We’d be a lot closer in the points if nor for some really bad luck in the first race at Caraway,” McCumbee said. “Something came loose during those first few laps and that put us behind for the entire season. We’re just going to keep doing the best we can and taking care of each race as it comes.”

After running his first full CARS LMSC Tour season in 2020, McCumbee was asked by Elliott to participate in the Touring 12 this year after primarily serving as a crew member for his teammate Sam Yarbrough during the previous season.

McCumbee considers 2022 to be a resounding success so far. He finally broke through for his first CARS LMSC Tour victory at Hickory Motor Speedway in March and his only finish outside the Top 10 was in the Old North State Nationals.

Although the sting from the mechanical failure at Caraway still lingers for McCumbee, he is only focused on building off the momentum from his four straight Top 10s and adding another victory, which he is confident will take place on Saturday evening at Dominion Raceway.

[Dominion] requires something a little different from most of the other venues we go to,” McCumbee said. “The track surface is still quite new and the track has a lot of speed. It also doesn’t hurt the tires all that much, which is uncommon at a lot of these tracks. We’ll have to be clever with how we set up the [No. 16] Aaron’s Ford and hopefully we can get us a win.”

Unlike other young drivers who have made their CARS LMSC Tour debut this year, Landon Pembelton already has a major victory to his name.

Only nine months removed from winning the ValleyStar Credit Union 300 at Martinsville Speedway, Pembelton has plenty of confidence on his side heading into Saturday’s Virginia is for Lovers 125 and believes that he can upset the regulars in front of the loyal Dominion Raceway fanbase.

“I think we’ve got some pretty good momentum rolling,” Pembelton said. “Last time we were at Dominion, we got a win and a third-place finish. Our Toyota Camry has been fast, so I’m looking forward to Saturday.”

The win at Martinsville drastically altered the development of Pembelton’s career, with Venturini Motorsports signing him to compete in the ARCA Menards Series on a part-time basis. Pembelton’s first start with the team is set to take place at Elko Speedway later this month.

Pembelton has been trying to keep his expectations realistic following last year’s ValleyStar Credit Union 300, but he considers himself fortunate to be driving for a Late Model Stock operation like Sellers Racing Inc. and wants to make the most of every single opportunity with the team.

Saturday’s Virginia is for Lovers 125 presents another chance for Pembelton to showcase his talent alongside many of the best Late Model Stock Car drivers along the East Coast and add another marquee victory to his burgeoning resume.

“A win would just create a lot more momentum for us,” Pembelton said. “If we can win against these guys, then we can win against anybody. Layne Riggs and Peyton Sellers have been tough on the NASCAR side, but you have to be on you’re A game in the CARS Tour, so winning would be a big deal for me.”

Jared Fryar enters Saturday’s Virginia is for Lovers 125 as one of two past winners at Dominion Raceway in the field alongside Jonathan Findley.

Fryar got his victory in 2017 after Jeff Oakley was disqualified for failing post-race inspection. Now with more experience on his side, Fryar believes that he can win in a more conventional matter despite only competing in two CARS LMSC Tour this year.

“It feels good to be back,” Fryar said. “I’m looking forward to getting back to it, especially at Dominion since I’ve run so good there over the years. We’ve been close a couple of times [after 2017], so hopefully we can seal the deal this time around.”

Several changes in Fryar’s personal life have contributed to his part-time CARS Tour schedule in 2022, which has also convinced him to put more emphasis on big money Late Model Stock Car races that include all three legs of the Virginia Late Model Triple Crown.

With the Thunder Road Harley-Davidson 200 at South Boston Speedway set to take place on July 2, Fryar wanted to shake off the rust by entering Saturday’s Virginia is for Lovers 125 against many of the same drivers who will also take part in that race.

In four CARS LMSC Tour races at Dominion, Fryar has never finished worse than sixth. He expects to keep that consistent streak going this weekend but knows that it will be a challenge to fend off drivers like Carson Kvapil, Kaden Honeycutt and Bobby McCarty for the win.

“I feel like we’ve put together a pretty good notebook from the last couple of years,” Fryar said. “We’ve got a really good racecar with really good horsepower, so I feel confident. These guys have been racing all year, so they have a little bit of a head start on us but we should still be right there with them.”

A full lineup of racing is in store for fans who attend Saturday’s Virginia is for Lovers 125 at Dominion Raceway. Two features are in store for Dominion’s Legends and Virginia Racer divisions along with Bandolero, UCAR and Any Car races.

The on-track action gets going at 7 p.m. with the 125-lap CARS LMSC Tour feature being the sixth race on the schedule.