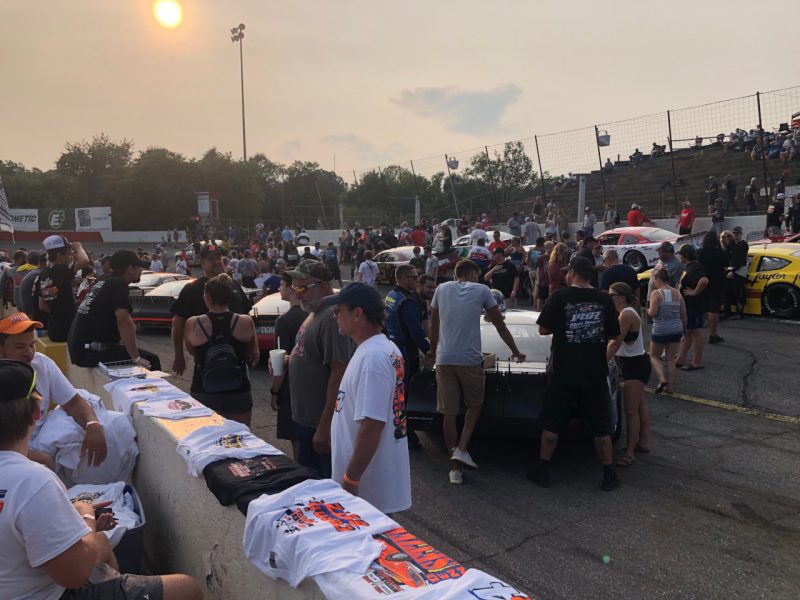 Following a month-long break, both divisions of the Solid Rock Carriers Tour will be back on track this weekend for one of the series’ proudest traditions in the Throwback 276 at Hickory Motor Speedway.

Ever since the Throwback 276 was established back in 2017, the event has grown into a marquee event for both the CARS Tour and short track racing in general, with almost every single driver adorning a special tribute scheme to someone who made an impact in their life or on stock car racing in general.

Outside of the on-track action, the Throwback 276 also provides auto racing fans a unique opportunity to meet and interact with legends of stock car racing who either have numerous victories to their name or have made an impact as a successful crew chief, car owner or broadcaster.

Seven legends will be honored at Hickory on Saturday before the green flag flies on a full night of racing. Those in attendance are:

Once the extensive pre-race ceremonies conclude, fans will be treated to a blast from the past as the current stars of the LMSC and PLM Tours look to write their own history with a win at Hickory.

The Throwback 276 at Hickory Motor Speedway will serve as Caruth’s debut in the CARS LMSC Tour, where he will drive a car prepared by Justin T. Carroll with a paint scheme honoring Dale Earnhardt Jr.’s tribute to his father Dale Earnhardt in the 2006 Aaron’s 499.

“It all just made sense,” Caruth said. “The CARS Tour has been a division I’ve wanted to race in for a while now and learning against the best in short track racing can make me better for big NASCAR. I’m just really excited to get going this weekend with Justin and John Carroll.”

With Earnhardt Jr. having provided him a tremendous amount of help during his career, Caruth felt that it was appropriate to have him be the inspiration for his tribute scheme, adding that choosing the Dale Sr. throwback was an easy decision to make.

Caruth is optimistic that he can give Earnhardt Jr.’s all-black scheme a strong run at Hickory on Saturday evening, as Caruth is fresh off a solid season at the historic short track that saw him become the first African American to win a race there since Chris Bristol back in 2005.

Despite his past success, Caruth does not anticipate a Throwback 276 victory to come easy with the competitive depth in the LMSC Tour field, but he remains optimistic about his chances to win, especially since he will be driving for the inaugural race winner in Carroll.

“It would mean the absolute world to win [the Throwback 276],” Caruth said. “Earning that victory would be amazing. Hopefully it happens, since it’s been a pretty hard year, but I’m ready to go.”

Confidence and momentum have been building for Isabella Robusto over the past several weeks.

Following a strong sixth place run in the Jack Ingram Memorial at Hickory Motor Speedway on June 11, Robusto believes she can apply the knowledge obtained from that event into her CARS LMSC Tour debut on Saturday evening.

“I’m feeling pretty good,” Robusto said. “It’s going to be pretty exciting racing with some of the big names in Late Model racing. Hopefully [Saturday] will go as well as our race in the Jack Ingram Memorial.”

For her throwback scheme, Robusto will be using the Mobil 1 Annual Protection colors run by Danica Patrick at Bristol Motor Speedway in 2017, who she considers to be a major inspiration for female drivers looking to break into the top ranks of motorsports.

Being able to battle drivers like Josh Berry and Carson Kvapil for the win in the Jack Ingram Memorial has only provided more optimism about her own career trajectory, adding that she could have potentially battled for the win in that event with a better tire conservation approach during the opening stages.

Robusto has plenty of notes to observe ahead of Saturday’s Throwback 276. With another talented field expected in the LMSC Tour feature, Robusto hopes to have similar speed in qualifying like she did for the Jack Ingram Memorial so she can put herself in a great position to win at the end of the night.

“I’ve been close so many times this year,” Robusto said. “Hickory is one of those tracks that I’ve been to so many times and nearly won at, so it would mean a lot to win. I’m going to pace myself a little better for [the Throwback 276] but putting down a good lap in qualifying will help me too.”

Success has followed William Sawalich across the United States since his last CARS PLM Tour victory at Tri-County Motor Speedway.

“Things have been going the way any 15-year-old would want them to,” Sawalich said. “Momentum has been key during these last few races, and I want to take it to Hickory.”

Sawalich is running two different throwback schemes in each race. He will drive a car honoring Richard Petty’s 200th NASCAR Cup Series win in the LMSC Tour race, while the PLM Tour feature will see him pilot a tribute scheme to his car owner and former ValleyStar Credit Union 300 winner Dennis Setzer.

Having won the most recent PLM Tour race at Hickory in March, Sawalich feels confident that he can park Setzer’s old colors in victory lane but admitted the LMSC Tour feature will require more patience and tire conservation due to its extended length.

With high expectations for the weekend, Sawalich is ready to keep his stellar 2022 season going and is cautiously optimistic that he can claim his first career LMSC Tour victory while also adding another win to his growing Pro Late Model resume.

“Sweeping both races would be pretty hard to do, but I think it’s a possibility,” Sawalich said. “I didn’t think it was possible at [Five Flags Speedway], but I believe that Dennis and Brandon Setzer will give me two good cars to make that happen again.”

The on-track action for the Throwback 276 at Hickory Motor Speedway begins at 8 p.m. on Saturday. The CARS PLM Tour feature will be the first race up on the docket before the CARS LMSC Tour wraps up the evening’s festivities with a 138-lap race.