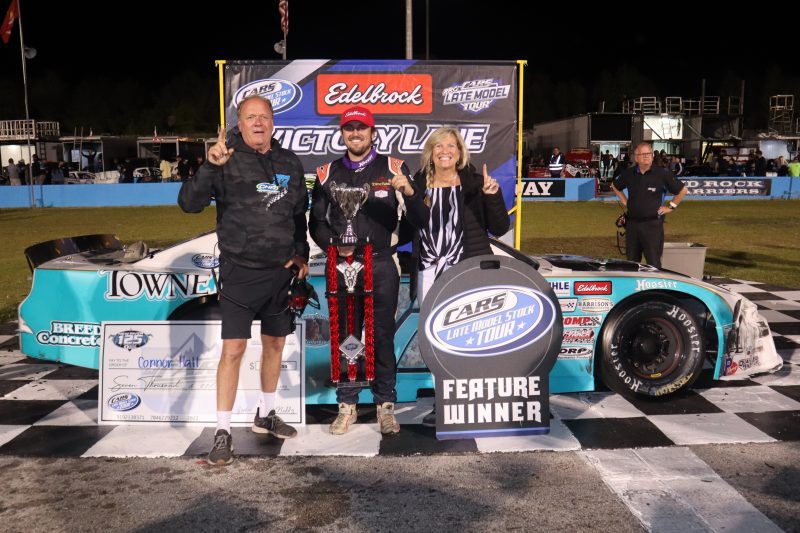 After starting on the pole and leading the first 10 laps of the 125-lap race, Hall dropped back as far as sixth as he spent much of the middle stages of the race saving his tires.  The Hampton, Virginia driver began to methodically work his way back through the field as the laps began ticking away.

On a restart with 45 laps remaining, Hall worked his way around Andrew Grady and survived several late race restarts.  The biggest challenge came from 2016 series champion Deac McCaskill closed in right up to his rear bumper on the final lap – but Hall held on for the win.

“I’m very glad I was here in November because I came in already knowing the line and understanding what this place was about and helped pick our learning curve up and make it lesson,” Hall, who ran in the Battle of the Stars last fall, said.  “There’s so much good competition and so many good teams in the CARS Tour.  That’s what makes it enjoyable and that’s why we’re here.  You can’t be the best if you run from the competition.”

Deac McCaskill settled for a runner-up finish, a result in stride.

“Catching and passing are two different things,” McCaskill said.  “He had a really strong car.  3 and 4, I think I was a little better than he was and hoping to work myself under him but just ran out of time there at the end.  It seemed like, when I got to second, he fired off really strong there for a couple laps and then I was able to run him down a little bit.  It’s a good finish for us.  It feels good to be back.”

Chad McCumbee finished in third while Carson Kvapil was fourth and Diaz fifth.

Diaz led laps early in the race before power steering issues forced him to pit multiple times during the race.  Despite having a car that he felt could win, Diaz was content with his fifth place finish after the issues he had all race.

“We definitely had something for [Hall],” Diaz explained.  “I’m not used to driving these cars without power steering, so I wasn’t trying to do anything to put us in danger.  I haven’t finished a race all season it seems like so to have these issues today and still finish the top five, overall, one of the ones that got away from us, but we’ll come back and hopefully continue on this momentum we have.”

After leading 54 laps, Grady was involved in a late race incident with Jones which relegated him to an 18th place finish.

The next stop on the Solid Rock Carriers CARS Tour schedule will be Ace Speedway in Alamance County on Friday, May 6, 2022.

Dustin Phillips picked up the victory in a stacked Champ Kart feature which saw 22 drivers take the green flag, while Tyler Stalls won in Bombers, Chase Singletary picked up another Legends victory, and Phoenyx Kimball once again dominated in Bandolero competition.