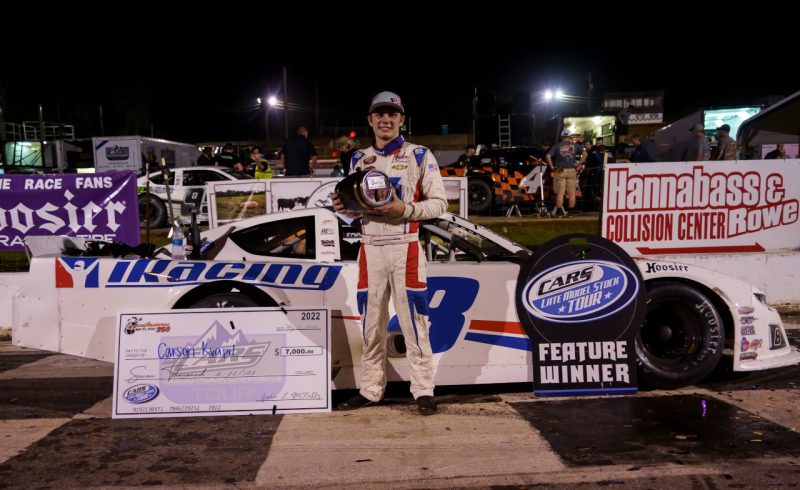 The Seven Hours of Franklin County proved to be a test of both physical and mental stamina for every single CARS Tour competitor during the weekend.

Inclement weather, track repairs, hard racing and numerous other factors dragged Saturday’s AutosByNelson.com 225 into the early hours of Sunday morning, yet Franklin County Speedway still managed to provide enthralling on-track competition that has kept fans coming to the facility during its long history.

By the time everyone had finally departed Callaway, Carson Kvapil had claimed his second career CARS Late Model Stock Car Tour victory and bolstered his already sturdy advantage in the point standings, while veteran Ryan Moore outdueled Luke Fenhaus in the closing laps to claim the Pro Late Model feature.

Carson Kvapil was not expecting to celebrate his 19th birthday in the early hours of Sunday morning at Franklin County Speedway.

A solid night for the 2021 CARS Super Late Model Tour turned into his second career victory in the Late Model Stock Tour division after he avoided an accident with 30 laps remaining that involved the top three cars in Mike Looney, Connor Hall, and Kaden Honeycutt.

“I knew those guys were going to race very hard,” Kvapil said. “They were racing hard 100 laps before [the incident] and I thought that would have helped us out at the end even if they didn’t wreck out. I saved a little bit compared to them and even though [Looney and Hall] were really good, we could have driven back up through there.”

Despite entering the AutosByNelson.com 225 with a comfortable 17-point advantage in the CARS Late Model Stock Car Tour standings, Kvapil’s finishes had declined by one position each race since bagging $30,000 in the season-opening Old North State Nationals at Caraway Speedway.

Kvapil was determined to break that trend and establish more efficiency with JR Motorsports starting at Franklin County, yet he found himself facing heavy pressure from local regular Kyle Dudley, who was looking to finally break through for his first CARS Tour win in front of the home crowd.

Even though Dudley’s experience at Franklin County far outweighed his, Kvapil maintained his composure during the final 20 laps and made Dudley use up his equipment, allowing him to enjoy an early birthday celebration with his team.

“[Dudley] is a local here and he knows all the little things about this track,” Kvapil said. “The first time he got into me, I knew we were going to be racing hard. I was trying to hold him down and he was trying to bring me up. We were a little bit better at the end and we drove away.”

With his victory, Kvapil is only expected to further open up his commanding points lead as he looks to join Jared Fryar as a champion in two CARS Tour divisions.

Mike Looney: A Bridesmaid Yet Again

Another CARS Tour race, another disappointing outcome for Mike Looney.

Shortly after taking the lead from Connor Hall in Saturday’s AutosByNelson.com 225 at Franklin County Speedway following 95 hard-fought laps between the two, Looney was turned sideways by Hall in front of the field, ending his hopes for that elusive first CARS Late Model Stock Car Tour win.

“From my perspective, I got wrecked,” Looney said. “I followed [Hall] for 95 laps and was trying to run a clean race. We had the best car, and I was trying to play it smart so we could put on a great show for the fans. I guess he couldn’t wait that long.”

Looney gave his home crowd plenty to cheer for early by putting his No. 87 Harrison’s Workwear Chevrolet on the pole. Although he was quickly passed by Hall, Looney consistently matched his lap times all evening while simultaneously preparing to make a move that would give him the lead.

Instead of celebrating a win, Looney ended up failing to finish his fifth consecutive CARS Late Model Stock Car Tour event after choosing to park his car after the crash. Hall rebounded from the minor damage he sustained to come home in fourth.

Hall took responsibility for the circumstances that ultimately prevented him and Looney from winning the AutosByNelson.com 225.

“I fully intended on trying to move [Looney] up the race track a little bit,” Hall said. “He was [bumping] me going into Turn 1. I don’t think of him any differently for doing that because it’s just racing. It sucks because we’ve never had an issue with Mike before. That was 100 percent my fault.”

Looney was not impressed by the move Hall made on him during their battle for the win, adding that he is not going to forget the conclusion of the AutosByNelson.com 225 when the two meet on track once again later this year.

“We still can’t finish one of these races,” Looney said. “I guess I’m going to have to drive like the rest of these dummies do and knock the hell out of whoever’s in the way. That seems to work out for the rest of them, but I’m just really dejected. We can’t catch a break.”

For most of the 100-lap CARS Pro Late Model Tour feature at Franklin County Speedway, Luke Fenhaus seemed destined to finally break through for his first victory in the series.

The 2021 Slinger Nationals champion saw those hopes evaporate on the final restart, as a problem with the rear end enabled Ryan Moore to chase down Fenhaus and edge him in a thrilling conclusion that saw the two muscle each other into the wall coming to the checkered flag.

Moore found himself in contention after struggling to crack the Top 5 during the early portions of the feature. Once the final caution for Caden Kvapil’s blown engine was displayed, Moore was determined to do everything possible to get his first career CARS Tour victory.

“This is why they say don’t give up,” Moore said. “We knew we didn’t necessarily have the fastest car at the beginning of the race, so we played it smart. These short track races come down to restarts at the end, and even though I hate to get physical, I come to win.”

A veteran short track competitor from the northeast, Moore has only made a handful of appearances in the CARS Tour since the 2018 season. His best finish prior to Saturday’s AutosByNelson.com 225 was a second that he obtained in the final CARS Super Late Model Tour race at South Boston Speedway last year.

Of all the victories Moore has claimed around the country during his career, he could not recall one that involved treacherous track conditions presented by Franklin County on Saturday, yet the three-lap shootout presented an all too familiar scenario that Moore capitalized on for the hard-fought win.

“I don’t think the track was ever ready for us to go green, but the fans waited around long enough,” Moore said. “[Fenhaus] was slipping and sliding, so I had to go where he wasn’t. He was sideways in the speedy dry, but I found a little grip on the bottom and made it work.”

With another memorable trip to Franklin County Speedway in the books for the CARS Tour, the Late Model Stock Car competitors will be looking for a more orthodox weekend when they head to Langley Speedway on June 4. The Pro Late Model Tour does not race again until June 25 at Tri-County Motor Speedway.