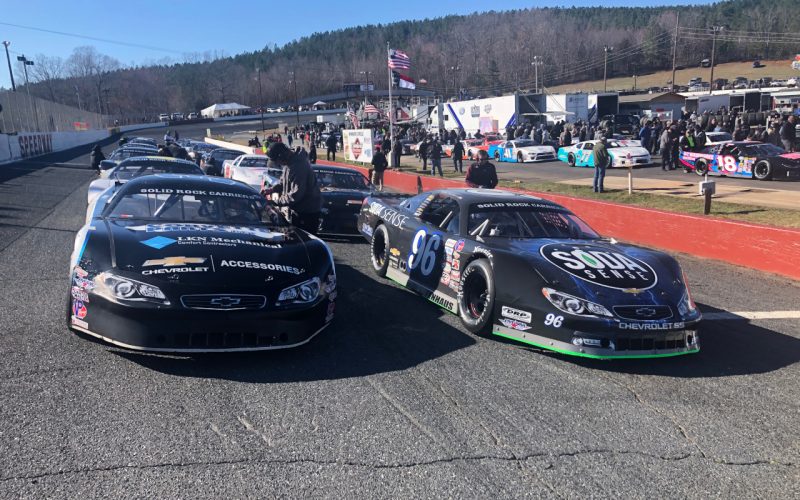 Following a month-long break, the Solid Rock Carriers Pro Late Model Tour is set to return to action on this weekend with the Keen Parts 200 at Tri-County Motor Speedway.

The first of two planned visits to Hudson, North Carolina for the CARS PLM Tour will see the division get paired up with the Southern Super Series; continuing a partnership between the two sanctioning bodies that has been ongoing for the past several years.

While many familiar names from the defunct CARS Super Late Model Tour are expected to take part in the 100-lap Southern Super Series feature, the preliminary CARS PLM Tour entry list includes several talented drivers that will be mixed in with the drivers fighting for the series championship.

Luke Fenhaus enters the Keen Parts 200 as the current leader in the CARS PLM Tour standings despite having yet to win a race in 2022. Caden Kvapil only trails Fenhaus by just five points and is looking to build some much-needed momentum as he tries to join his brother Carson as a CARS Tour champion.

Four races into his rookie season and MacDonald has only finished outside the Top 5 just once, but he hopes that the early-season consistency translates into victories that will help him get back into the championship fight with Luke Fenhaus and Caden Kvapil.

“We started the year off strong,” MacDonald said. “We’ve had some good runs, so now I’m looking for that win. They say if you put yourself in the Top 3, the wins will come, so that’s what we’re working towards.”

Although MacDonald has yet to win in the CARS Tour, he has already found victory lane at one of NASCAR’s premier tracks.

In the Pro All Star Series-sanctioned Northeast Classic at New Hampshire Motor Speedway, MacDonald put together his best performance in a full-bodied stock car by holding off talented competitors in the region like Eddie MacDonald, D.J. Shaw, and others for the win.

MacDonald considers his win in the Northeast Classic to be the biggest of his career to date, adding that he now feels more confident against his fellow CARS PLM Tour competitors with diverse tracks like Tri-County Motor Speedway, Wake County Speedway and others coming up over the next several weeks.

One trait MacDonald has picked up from racing in the southeast is the importance of conserving equipment up until the end of a race. He said that patience will be imperative around Tri-County Motor Speedway for him to break through for his first CARS PLM Tour victory.

“We have to make sure we don’t get tore up,” MacDonald said. “Hopefully we have some speed during the long run, but that’s been one of our strengths this year. I’ll have my crew chief from Canada in Andrew Hicken with me this weekend, so I’m really excited for Saturday.”

A familiar face to Hickory Motor Speedway fans in Katie Hettinger will be making her CARS PLM Tour debut this weekend for the Keen Parts 200.

Currently seventh in Hickory’s track standings, Hettinger enters Saturday’s race at Tri-County Motor Speedway with several Pro Late Model starts to her name, which is why she believes it will not take long to find a comfort zone once she hits the track.

“I’m really excited,” Hettinger said. “I’ve been wanting to do the CARS Tour for a while now, and that’s always been part of the plan, even more so now since we don’t run the Carolina Pro Late Model Series anymore. We’re all looking forward to finally making that first start.”

Despite not winning in the Carolina Pro Late Model Series during her rookie season, Hettinger has enjoyed plenty of success making laps around Hickory’s abrasive surface, with her accomplishments including three wins in 2022 alone.

Competing in the competitive environments of Hickory and the Carolina Pro Late Model Series has only given Hettinger more confidence in her driving abilities, who added that she expects the trend to continue in her first CARS PLM Tour start.

Hettinger believes that having prior track time at Tri-County puts her on more even ground with some of her competitors but admitted that she is not completely sure on what to expect from a strategy standpoint with the turns having been recently paved.

While Saturday’s Keen Parts 200 will present plenty of challenges for Hettinger, she believes that a Top 5 finish is a feasible goal, especially since she will have CARS PLM Tour points leader Luke Fenhaus as a teammate to lean on for the entire weekend.

“Luke [Fenhaus] is a really good driver, which shows in his CARS [PLM] Tour results,” Hettinger said. “Hopefully he’ll give me some tips on how to race some of the other drivers and I’m really excited to be racing with him.”

The CARS PLM Tour feature will be the first race on the schedule for Saturday’s doubleheader at Tri-County Motor Speedway, with the green flag set to fly at 7 p.m..