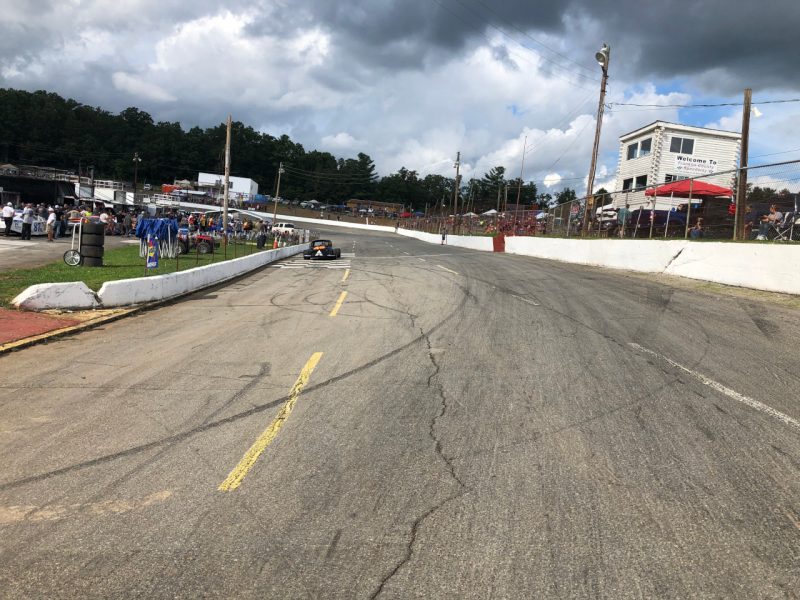 The only Solid Rock Carriers CARS Tour event at Franklin County Speedway featured one of the greatest finishes in the brief history of the series.

Late Model Stock Car veterans Jared Fryar and Mike Looney engaged in an intense but clean fight for the lead during the final few laps of the 2020 AutosByNelson.com 200, with Fryar ultimately prevailing after nudging Looney out of the groove in Turn 2 coming to the checkered flag.

Franklin County will welcome the CARS Tour back this weekend for the AutosByNelson.com 225 following a one-year hiatus. The Late Model Stock Car division will be joined by the Pro Late Model Tour, which is running its first race since the Puryear 225 at Greenville-Pickens Speedway on Apr. 9.

When the green flag dropped on the 2020 AutosByNelson.com 200, Mike Looney was confident that he would finally claim his first CARS Late Model Stock Car Tour victory.

The long-time Virginia short track veteran immediately took control by starting on pole and leading a race-high 118 laps, yet Looney could not hold off a late charge from Jared Fryar in what he considers to be one of the best battles for a victory in his long career.

“That was a hell of a race,” Looney said. “Jared and I had one little exchange and I passed him back, but he dug deep and matched my pace. He got me with the crossover and I was working one underneath him coming to the checkered flag. I really enjoyed it, even though I hate that we couldn’t win that one. But you can’t hang your head over a finish like that.”

Looney has always considered Franklin County to be one of his favorite tracks. He made his first career start at Franklin County in the mid-1990s and would later become one of the most consistent drivers at the track, with his accomplishments including a Pure Stock championship in 1998.

For Looney, there are many factors that separate Franklin County from other tracks in the region. The facility’s unique design puts more emphasis on driver talent as opposed to having a perfect setup, but Looney added that patience is needed with tires due to Franklin County’s abrasive surface.

Expectations are high for Looney as the CARS Tour makes their second trip to Franklin County on Saturday. Not only is Looney determined to get that elusive first win, but he also wants to end a recent slump that has seen him end four consecutive races behind the wall.

“At this point, we’ll be happy to just finish a race,” Looney said. “We’ve only finished a handful of CARS Tour races, but when we do finish, we’re right there. Our goal is to put together a great car and just be smart with the lapped traffic.”

One goal that William Sawalich established for himself ahead of the 2022 season was to accumulate as much track time as possible.

The 14-year-old has accomplished that goal by regularly competing in both the CARS Late Model Stock Car and Pro Late Model Tour this year. With a win already under his belt in the latter division, Sawalich feels confident that another strong performance is ahead for him at Franklin County Speedway on Saturday.

“Things have been going pretty good,” Sawalich said. “I’m still learning both cars and the differences between them. It’s coming to me naturally, especially with the Late Model Stocks, and I can’t thank [Dennis and Brandon Setzer] for giving me great cars in both tours.”

Getting experience in both divisions has helped Sawalich find a comfort zone with Setzer Racing & Development. He hopes that the track time will allow him to put together a better performance in his second trip to Franklin County after finishing ninth in a Carolina Pro Late Model Series event at the track last July.

Sawalich believes he has a firmer understanding about navigating Franklin County this time around but admitted that efficiency will be imperative against drivers like Caden Kvapil, Ryan Moore and Luke Fenhaus if he wants to add another victory to his growing resume.

“I think we’re pretty prepared for Saturday,” Sawalich said. “We’ve got some good notes from last year, but everyone there is going to be tough. If we get the car where we wanted and I can execute myself, then we’ll have ourselves another win.”

It has been nearly two years since the last time Gus Dean has competed in a CARS Tour event.

The Bluffton, South Carolina native is making his CARS Tour return this weekend in a Pro Late Model at the site of his most recent appearance in Franklin County Speedway, where he is confident that he can continue a recent streak of success within the discipline.

“We’re coming back with DLP Motorsports, and we won four races in a row with those guys,” Dean said. “This No. 57 is a really great car, so everything is looking promising for the weekend, and I can’t wait to get to Franklin County.”

One of those victories for Dean occurred at Franklin County last year with the Carolina Pro Late Model Series, where he was tasked with holding off Tyler Church and Nick Loden during the closing laps, the latter of which went on to win the series championship.

Despite only making a handful of starts at Franklin County, Dean has quickly gotten acclimated to the abrasive nature of the facility and expects that tire conservation will be a factor in Saturday’s Pro Late Model Tour feature even though the race is only 100 laps long.

Dean believes his experience across several forms of racing gives him an advantage over his younger competition and expects another successful outing in a busy year that has included three starts in the ARCA Menards Series for Venturini Motorsports.

“We’re just having a lot of fun this season,” Dean said. “We’re not racing for points in anything, so everywhere we go, our goal is to win. Adding to that total this weekend would only make this year a whole lot better.”

The Pro Late Model Tour will kick off the on-track festivities for the AutosByNelson.com 225 at Franklin County Speedway with a 100-lap feature starting at 7 p.m.. Once their race concludes, the Late Model Stock Car competitors will battle each other for 125 grueling laps.