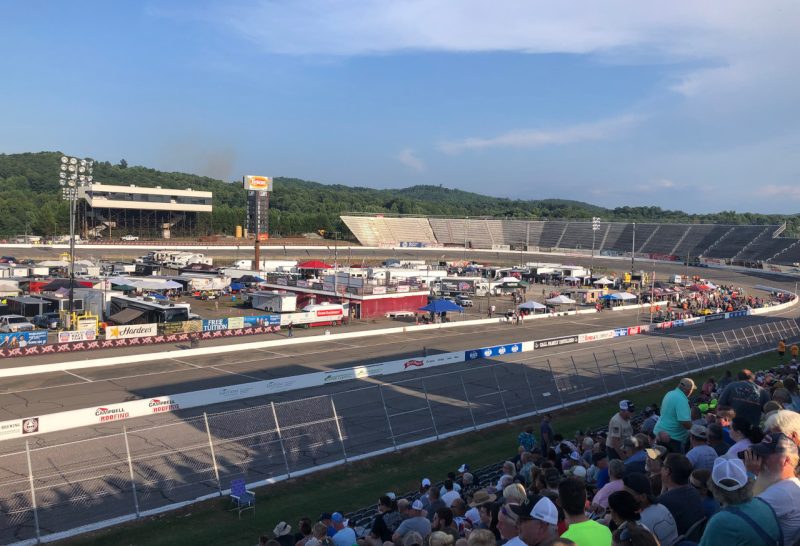 After months of preparation and anticipation, the Solid Rock Carriers CARS Late Model Stock Car Tour will finally descend onto the historic North Wilkesboro Speedway this week for the Window World 125.

Wednesday’s Late Model Stock feature will be one of several events that will formally wrap up a successful month of racing at North Wilkesboro, with names like Ryan Newman, Bobby Labonte, Ryan Preece, Bubba Pollard and many more all getting an opportunity to compete at the facility.

Once the on-track action wraps up on Wednesday, North Wilkesboro’s pavement that has been in place since 1957 will be removed to create a temporary dirt track for more races in October. Fresh pavement will be put down on the track to go along with the current renovations that are expected to be completed before the start of the 2023 season.

A star-studded field for the LMSC Tour will send out the old surface at North Wilkesboro on Wednesday, as an even mix of auto racing veterans and promising rookies look to add their name to the track’s long and storied record books.

Of the 30 drivers entered in the Window World 125, easily the most recognizable face is NASCAR Hall-of-Famer Dale Earnhardt Jr.

The son of seven-time NASCAR Cup Series champion Dale Earnhardt, Dale Jr. put together a stellar career of his own from the 1990s up until his retirement from full-time competition in 2017. His accomplishments include two Daytona 500 victories in 2004 and 2014, as well as two NASCAR Xfinity Series championships.

Now a commentator for NBC Sports, Dale Jr. still competes in the Xfinity Series once a year, but Wednesday’s Window World 125 at North Wilkesboro will see the 15-time most popular driver take part in his first Late Model Stock event since 1997.

The car Dale Jr. is driving will be a throwback to his No. 3 Sun Drop paint scheme that he drove during the mid-1990s. This will not be the first time the Sun Drop scheme has appeared at North Wilkesboro, as Dale Jr. ran that car during a Late Model Stock event at the facility in 1993.

Dale Jr.’s participation in the Window World 125 continues a long-standing relationship he and JR Motorsports have shared with the CARS Tour. Current Xfinity Series competitor Josh Berry won three races with JR Motorsports in the LMSC Tour’s inaugural year before later claiming the series championship in 2017.

Even with Berry moving on to the Xfinity Series, Carson Kvapil has carried on the efficiency of JR Motorsports’ Late Model Stock program by currently holding a sizable advantage in the LMSC Tour standings with two victories so far this year.

All eyes will be on JR Motorsports for Wednesday’s Window World 125. While Kvapil looks to build on his points lead, Dale Jr. is searching for one more major victory in front of what is expected to be a vibrant crowd at North Wilkesboro.

Racing at North Wilkesboro Speedway has been a family tradition for Dylon Wilson.

A fourth-generation competitor, Dylon will have the opportunity to finally turn laps at the historic facility himself on Wednesday evening. Dylon expects a surreal atmosphere at North Wilkesboro but is eager to participate in such a historic event for East Coast short track racing.

“This is a big deal for me,” Dylon said. “As soon as they broke the news, I wanted to be a part of the Late Model Stock race. It’s an honor to share the track with so many big names and I’m really looking forward to running with such a prestigious field.”

Dylon’s great uncle Charlie Combs was one of three people who were instrumental behind the construction of North Wilkesboro in 1947 alongside Enoch Staley and John Masden.

As North Wilkesboro continued to grow over the next several decades, Dylon’s family became intertwined with that development. His great grandfather Jack Combs ran several races around the facility before becoming its co-owner, passing down his love for the track to his son and Dylon’s grandfather Dean Combs.

Of the 60 victories Dean obtained during his career in the NASCAR Goody’s Dash Series, 14 of them came at his home track of North Wilkesboro. Dean’s son and Dylon’s father Eric Wilson, who also raced in the Goody’s Dash Series, competed in a Late Model Stock event at the track before its closure in 1996.

Watching North Wilkesboro deteriorate over the years was never easy for Dylon or anyone in his family. Now that the track has a more promising future ahead, Dylon is looking forward to making more new memories at North Wilkesboro as a driver just like his father, grandfather and great grandfather.

“I proposed to my wife on the frontstretch at the start-finish line,” Dylon said. “The main reason I did that was because it was a similar scenario to how my great grandfather proposed. I thought the track was going to be torn down, so I wanted to do it before that happened. I’m glad I was wrong though.”

Up until a couple of weeks ago, Stefan Parsons did not believe he would be among the 30 drivers taking the green flag for the Window World 125 at North Wilkesboro Speedway.

The withdrawal of Chad Bryant Racing’s second car being piloted by NASCAR Camping World Truck Series competitor Ty Majeski created an opportunity for Stefan to compete at the track that meant so much to his late uncle and NASCAR Hall of Famer Benny Parsons, who passed away in 2007 from lung cancer.

“The deal came together pretty late, but I feel like we’re going to have a good car,” Stefan said. “AK Performance always does such a great job and I’m glad everything ended up coming together. I can’t thank everyone enough for making this happen and I’m excited to get to North Wilkesboro.”

Following Benny’s passing, his widow Terri worked tirelessly to ensure that North Wilkesboro would one day see active competition again. Terri and the rest of the Parsons family got to see that dream become a reality with a full schedule of races slated for August and October.

Stefan was always optimistic about the possibility of North Wilkesboro one day reopening and revitalizing the adjacent town that Benny and so many members of his family grew up in. He wishes that Benny could see how much support the track has gotten during its resurgence but is confident the past month of racing is only the beginning of a new era for North Wilkesboro.

The worn-out surface of North Wilkesboro has Stefan anticipating a race like those on Florence Motor Speedway and the now defunct Myrtle Beach Speedway, in which drivers will have to aggressively save tires to have a car that can contend for a victory in the closing stages.

Stefan considers himself fortunate to just race in the Window World 125. He expressed his gratitude towards Chad Bryant and AK Performance for giving him the opportunity and hopes to take home a checkered flag in front of his family on Wednesday night.

“It would be huge to win this one,” Stefan said. “I worked for Chad Bryant back in 2018 with his ARCA team and AK Performance is the team I started racing with when I was running Bandolero and Legend cars. It would be special from that perspective but also because of how special North Wilkesboro is to our family.”

The final night for North Wilkesboro’s old pavement will see the CARS LMSC Tour share the track with Street Stocks and Limited Late Models. Qualifying for the LMSC Tour will take place on Tuesday before the green flag for the Window World 125 flies the following night at 7:30 p.m.