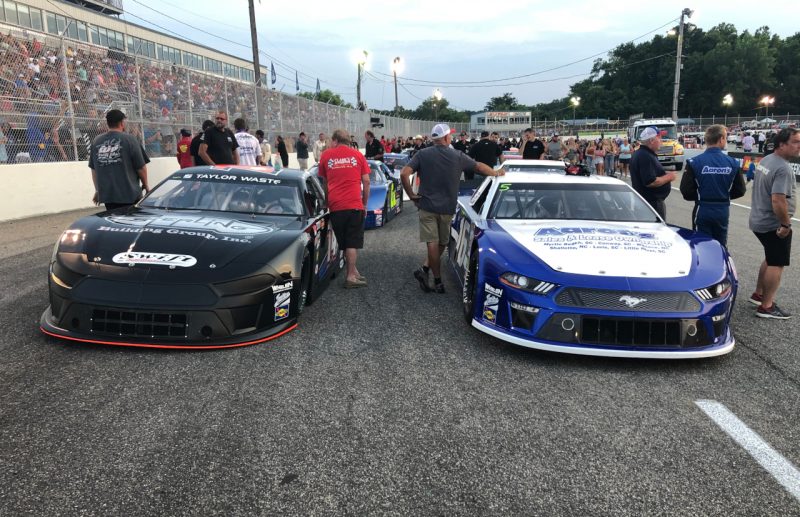 Following an intense and unpredictable Puryear Tank Lines 225 at Franklin County Speedway, the Solid Rock Carriers CARS Late Model Stock Car Tour will stay in the state of Virginia for the series’ third visit to Langley Speedway for the VisitHampton.com 125.

Boasting one of the proudest short track cultures on the East Coast, Langley has hosted races for NASCAR, ASA and the CARS Tour’s predecessor in the USAR Pro Cup Series during its proud seven-decade history while simultaneously serving as a proving ground for drivers such as Ray Hendrick, Elton Sawyer, C.E. Falk III and three-time Daytona 500 champion Denny Hamlin.

A talented field of Late Model Stock Car competitors will look to add to Langley’s history when the green flag flies on Saturday evening. Carson Kvapil remains the top driver in the CARS Late Model Stock Car Tour after bolstering his commanding points lead with a victory at Franklin County.

Langley served as Honeycutt’s breakout race in the best possible way. He led all 125 laps contested that evening before finishing second in the final point standings and is hoping for a similar outcome on Saturday evening to provide a much-needed jolt for his 2022 season.

“I’ve got the same amount of confidence coming back [to Langley], especially now that I have some experience,” Honeycutt said. “I’m going to try and take the knowledge I got from last year and carry it over to [Nelson Motorsports]. My plan is to repeat what I did last year.”

Honeycutt had no idea on what to expect out of Langley when he arrived at the track for the first time last year, but he quickly figured out how to navigate the track and knew the car provided to him would be strong enough to translate into his first career CARS Late Model Stock Car Tour victory.

The win at Langley was all the validation Honeycutt needed when it came to excelling in Late Model Stock Cars. Honeycutt’s confidence has not wavered despite having not won a race since holding off current series points leader Carson Kvapil at Florence Motor Speedway last October.

Despite the winless streak, Honeycutt believes he is close to a breakthrough with Nelson Motorsports and said Langley presents the ideal opportunity for him and teammate Bobby McCarty to get their respective seasons on track and make a push towards Kvapil for the championship.

“We were on it at Franklin County,” Honeycutt said. “The qualifying effort wasn’t the best, but we had really good race trim. Some things just didn’t work the way we wanted them to, but everyone is working hard to get me and Bobby [McCarty] better. I have no doubts that we’ll be quick this weekend.”

Brenden Queen eager to win in front of hometown crowd

A lot has changed for Brenden Queen since his lone CARS Late Model Stock Car Tour start back in 2019.

Queen now has two Langley track titles and a victory in the facility’s Hampton Heat 200 on his resume. With confidence and experience on his side, Queen has every reason to believe he can upstage the CARS Tour regulars and score a victory in front of the local fanbase.

“I feel blessed to just have the chance to race in a series like that at my home track again,” Queen said. “I also feel a lot better off compared to last time because we’ve come a long way since 2019. The competition is the best out there but those are the people we want to beat.”

Maturity is the main aspect that Queen says has helped him become one of the most consistent drivers in Langley’s weekly division, adding that he now has a more thorough understanding on what adjustments to make to his car and when to be aggressive on the track.

That valuable experience is why Queen is looking forward to facing such a strong field of cars on Saturday. Queen is expecting a very similar race to the Hampton Heat on Saturday evening, especially when it comes to avoiding trouble and maintaining solid track position.

Having raced against many drivers in the CARS Late Model Stock Car Tour plenty of times in the past, Queen enters Saturday determined to showcase the efficiency of his No. 03 Oldskool Video Games & More Toyota at Langley on a larger stage and build momentum over the rest of the track’s 2022 season.

“This would be like winning the Hampton Heat,” Queen said. “That was a feeling I’ll never forget, and I’d love to have that feeling again. We’ve won championships and plenty of races, but we don’t have a CARS Tour win, so to cross that off the bucket list would be one of the biggest wins of my career.”

Saturday’s race at Langley Speedway will be an all too familiar experience for Connor Hall.

The Hampton, Virginia native has enjoyed many memorable evenings at Langley that include a victory in the Hampton Heat back in 2019 and hopes that he can carry over that valuable experience into another triumph at his home track.

“We’re pretty excited about Langley,” Hall said. “Our goal is to obviously capitalize because that’s one we should definitely have a good shot at with my previous seat time. I’m just focused on trying to make this one count.”

While Hall enjoyed mixing it up with Langley’s track regulars, he wanted to branch out away from the facility starting in 2022 with the goal of gaining more experience against many of the best Late Model Stock competitors in the region.

Everything has gone mostly according to plan for Hall. He scored his first career CARS Late Model Stock Car Tour victory with Chad Bryant and Triple R Racing at Goodyear All American Speedway back on Apr. 23 and currently sits fourth in the point standings.

Fresh off leading a race-high 95 laps at Franklin County Speedway, Hall feels comfortable will the speed in the cars provided by Bryant and Triple R, but he admitted that everything will have to be perfect on his No. 77 Towne Bank Chevrolet if he wants to visit victory lane at Langley during a CARS Tour event.

“We have to make sure the car is balanced,” Hall said. “As long as we play the strategy how we want and execute, we’ll have a great shot on Saturday.”

On-track activity for the VisitHampton.com 125 will begin at 7 p.m. on Saturday evening with Langley Speedway’s three weekly divisions in the UCAR, Super Street and Pro Six features. The 125-lap CARS Late Model Stock Car Tour feature will be the last race on the schedule.