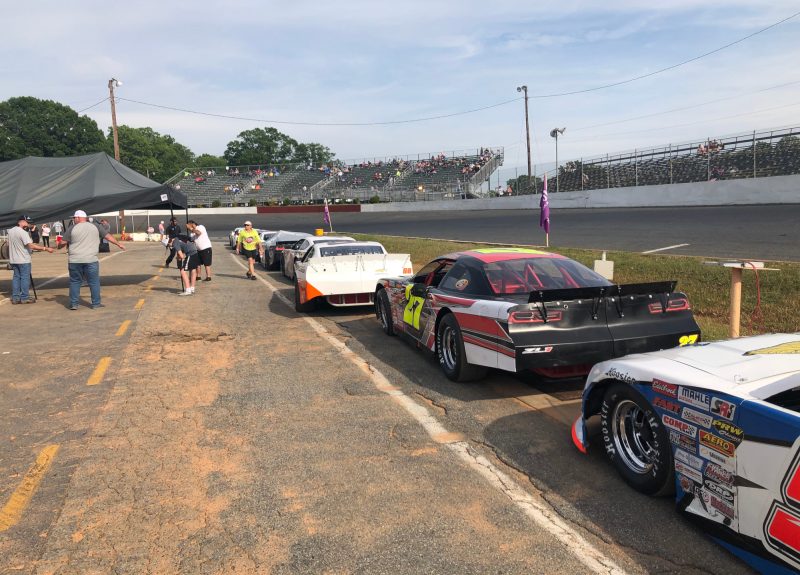 An offseason dominated by change will conclude for the Solid Rock Carriers CARS Tour this weekend when the series kicks off its most ambitious season yet with the Puryear Tank Lines Old North State Nationals at Caraway Speedway presented GXS Wraps.

The prestigious event is set to open a season for the first time in its four-year history, where many of the best Late Model Stock drivers in the country will battle each other for 200 laps in search of a $30,000 race-winning paycheck.
Saturday’s on-track activity for the Old North State Nationals will also mark the official debut of the CARS Pro Late Model Tour, which replaces the Super Late Model division that had accompanied Late Model Stocks and other national touring series since its inception back in 2015.
A dozen events make up the inaugural season of the Pro Late Model Tour, all while Late Model Stock competitors contest a grueling 15-race schedule, eclipsing last year’s record-setting total of 13 races.
Drivers like Bobby McCarty, Jared Fryar, Layne Riggs, Luke Fenhaus and others are all determined to open the 2022 season on a strong note when the green flags drop for the Pro Late Model and Late Model Stock features of the Old North State Nationals on Saturday and Sunday respectively.

In previous years, CARS Tour owner Jack McNelly was content on holding the series’ most prestigious Late Model Stock race a few weeks into the season.
With 2022 bringing so many changes to the CARS Tour, McNelly decided that the best way to kick off the festivities was to open the season with the division’s most storied event in the Old North State Nationals.
McNelly has worked tirelessly to get everything prepared for the upcoming weekend but believes making the Old North State Nationals the first race is a perfect way to immediately get drivers and fans invested into the season.
“It’s a little stressful to open the year with an event this big,” McNelly said. “We have a bunch of fellows who are anxious to go racing and I guess I took a page out of NASCAR’s playbook with us having [the Old North State Nationals] right out of the gate.”
Along with a new date, the Old North State Nationals will now take place at a completely different venue in the form of Caraway Speedway.
Orange County Speedway had been the host track for the Old North State Nationals since the event’s inception except for 2020 when the race was moved to Greenville-Pickens Speedway in October due to the COVID-19 pandemic.
With the CARS Tour not returning to Orange County in 2022, McNelly wanted to pick a facility that could easily accommodate the Old North State Nationals from a racing and fan perspective, adding that Caraway checked off both boxes.
Regarding fans, McNelly said that Caraway offers plenty of room for spectators and trackside parking, which he believes will make the 2022 edition of the Old North State Nationals the highest-attended event in the history of the CARS Tour.
McNelly has seen the Old North State Nationals blossom into the crown jewel event he sought to create when the first running was held back in 2019 and is confident that the event’s place as the season-opener will only strengthen the growing tradition in the series.
“This is one of our marquee events outside of the Throwback 276,” McNelly said. “We take a lot of pride in this race and put a lot of effort into holding it. We’re hoping everything goes well and we’re encouraging those who have been holed up all winter to come out and see some great racing.”
In its brief history, the Old North State Nationals has featured its fair share of classic CARS Tour races. Lee Pulliam outdueled Josh Berry in a thrilling finish for $30,000 during the inaugural race in 2019, while Berry himself had to hold off Deac McCaskill for the win in the closing laps of last year’s event.
With a stacked entry list coming together for the 200-lap Late Model Stock feature, McNelly expects everyone to be in for another fantastic show and is eager to see how the series regulars stack up against those explicitly looking for a rich payday on Sunday.
“I think we’re in for another competitive year,” McNelly said. “There are going to be some heavy hitters and outsiders running with us, so our guys are going to have to get up on the wheel if they want to win for sure.”

Kaden Honeycutt was sure that he had his first career CARS Late Model Stock Car Tour victory locked up when the series made its inaugural visit to Caraway last year.
A late-race caution undid a strong evening the rookie had enjoyed up to that point, as Honeycutt was bested on the ensuing restart by his then-car owner Justin Johnson, relegating him to third after he led 44 laps.
Honeycutt still occasionally thinks about what could have been at Caraway, but he has every reason to believe he will be one of the front runners when the green flag drops for the Old North State Nationals on Sunday afternoon.
“We still got third after the green-white-checkered, but we led so much that night,” Honeycutt said. “That thing was pretty much won no doubt but we’re coming back with vengeance on our minds with a new team in Nelson Motorsports. We were actually fighting Bobby [McCarty] for the win last year, so we’re going to come back better and try to win $30,000.”
Despite coming up short on a victory, Caraway proved to be a major turning point for Honeycutt’s inaugural CARS Tour season.
After finishing no better than seventh in his first four races, Honeycutt came together with Johnson to make adjustments that would get the setup of his No. 4 Puryear Tank Lines Ford closer to that of his car owner.
Honeycutt never finished worse than seventh over the final nine events of 2021. He added two CARS Late Model Stock victories to his resume, which included leading every single lap at Langley Speedway for his first win, before finishing second in the final standings by just 13 points.
While he was thrilled to learn from series veterans and gain experience as a rookie, Honeycutt has no intention of settling for another second place points finish and is determined to open 2022 with his third career victory.
Honeycutt expects a much different event at Caraway on Sunday with the Old North State Nationals taking place in the daytime for 200 laps, but he said much of the same race-winning principles will apply regarding patience and conserving equipment.
“Caraway is very hard on brakes,” Honeycutt said. “You’re going to use up quite a bit of brakes and there’s also a lot of tire falloff. [Sunday] is going to be a much harder race compared to last year when it comes to tires and preserving your equipment. We did that last year and it really showed even though we only went 125 laps.”
A lot more money is on the line compared to last year’s race at Caraway as well.
If Honeycutt were to claim $30,000, he would join a small but elite list of past winners in the Old North State Nationals that includes four-time NASCAR Advance Auto Parts Weekly Series champion Lee Pulliam and current NASCAR Xfinity Series driver Josh Berry, who has won the race twice.
Honeycutt knows that a victory in the Old North State Nationals will be extremely challenging to pull off, but he is confident that he can join Berry and Pulliam as a winner of the event and establish himself as an early favorite for the CARS Late Model Stock title.
“Winning would definitely gives us a lot of momentum for our season,” Honeycutt said. “We’re going to have to work really hard, but I think we’ve got a great car. We tested it a while ago but now we just have to see where we stack up.”

The 2022 CARS Tour season will see a handful of drivers embark on their first full-time campaign, while others will chase a title in a brand-new ride.
After coming up a few points short of a Late Model Stock title in his rookie campaign, Kaden Honeycutt will join the team that defeated him in Nelson Motorsports to become a teammate to three-time champion Bobby McCarty in the No. 12 Chevrolet.
The Nelson Motorsports duo will still have to deal with the JR Motorsports No. 8 for the Late Model Stock championship. Instead of Josh Berry piloting that ride, Carson Kvapil is set to contest the full the schedule after he claimed the final CARS Super Late Model Tour title last year.
Other changes amongst the series regulars included Jonathan Shafer moving over from Lee Pulliam Performance to pilot R&S Race Cars’ in-house Late Model Stock and Justin Johnson driving the No. 4 for his own program instead of the No. 44, which will be operated by Conner Jones.
Joining the established veterans of the CARS Late Model Stock Tour are Langley Speedway track regular Connor Hall, who joins the Touring 12 in a collaboration between Chad Bryant Racing and Triple R Racing. Chad McCumbee also returns to the series after skipping the 2021 campaign.
Rookie Zack Miracle is looking to make a strong first impression in his first season as a member of the Touring 12. The Florence Motor Speedway regular turned heads by qualifying first in last year’s Aaron’s 125 at the facility, which he backed up with pole runs in the track’s prestigious South Carolina 400 and Icebreaker; the latter of which saw him finish second.
In the Pro Late Model Tour, Luke Fenhaus will seek to become the division’s first champion in a car fielded by Highlands Motorsports. Fenhaus became a household name in 2021 by winning the Slinger Nationals and subsequently earning a one-off start in the Superstar Racing Experience, where he finished second to Marco Andretti.
Among those ready to challenge Fenhaus in the Pro Late Model Tour opener at Caraway are William Sawalich in Brandon Setzer’s car as well as Brent Crews, who is currently under contract with Kevin Harvick Inc. Management.

Fans are encouraged to get tickets quickly ahead of the weekend’s on-track action before available trackside spots sell out.
Late Model Stock qualifying races will take place on Saturday afternoon at 4 p.m. along with the l00-lap Pro Late Model feature. The green flag for the 200-lap Old North State Nationals will fly on Sunday at 2:30 p.m.
For more information on the CARS Late Model Stock Tour and the CARS Pro Late Model Tour, visit www.carsracingtour.com. Be sure to stay active and social with the tour by liking “CARS Tour” on Facebook, following @CARSTour on Twitter and scrolling through photos on Instagram cars_tour.
Additional series information can be obtained by calling the CARS Tour series office, located in
Mooresville, NC, at 704.662.9212.