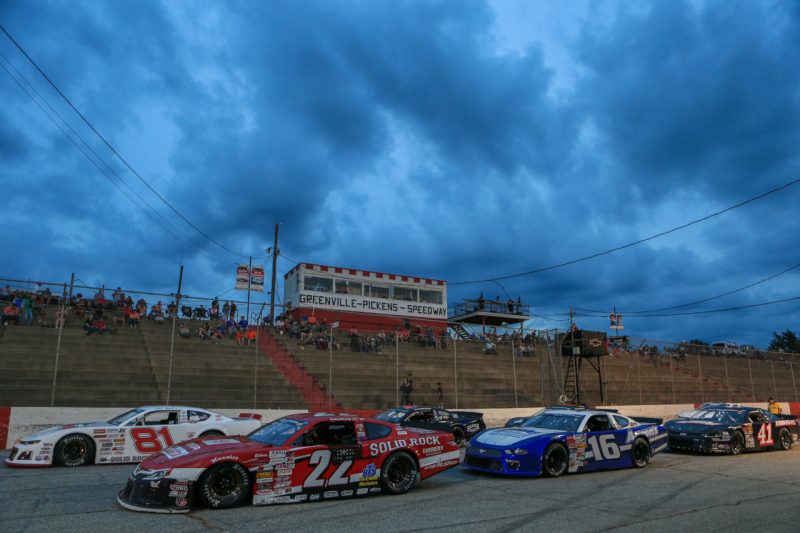 Youth has dominated both the CARS Late Model Stock Car and Pro Late Model Tour through the first two races of the 2022 season.

Three of the four winners in those events were born during the 21st Century, with the two respective points leaders of the CARS Tour in Carson Kvapil and William Sawalich possessing a combined age of 33, which is still four years younger than the most recent Late Model Stock winner in Chad McCumbee.

The youth movement of the CARS Tour will look to stay in control when the series visits Greenville-Pickens Speedway on Saturday evening for the Puryear Tank Lines 225 presented by Harrison’s Workwear.

One of the biggest surprises to open the 2022 CARS Tour season has been the consistency displayed by Chase Burrow.

“We had our expectations but not much to base them off of,” Burrow said about his strong start. “This is a new team, new car and new tracks for me. I’m just showing up and trying to be competitive. We’ve only worried about us during these first two races and that’s worked out pretty good so far.”

Veteran Rusty Skewes was initially set to pilot the No. 8 Edwards Racing Enterprises Chevrolet starting with the Old North State Nationals at Caraway, but Burrow stepped into the car while Skewes continued to recover from offseason surgery.

Burrow has made the most of the opportunity by keeping his car clean and completing every single lap in the first two races. Adapting to changing track conditions at those races also provided Burrow and his team plenty of notes to utilize when the CARS Tour returns to Caraway and Hickory later this year.

Greenville-Pickens Speedway is another track in which Burrow has no prior experience but he plans to actively study past CARS Tour events at the facility and lean on his knowledge from the opening stretch so he can improve upon his career-best finish of fifth.

“A lot of these long CARS Tour races at low-grip tracks involves tire management,” Burrow said. “I’ve never been to Greenville but from what I’ve seen, it looks racy with very little grip. There’s a lot I’m not sure about heading into the weekend but we’ll get a gameplan together once we show up on Friday.”

Saturday’s Puryear Tank Lines 225 at Greenville-Pickens Speedway will see one of the most successful drivers of the former CARS Super Late Model Tour return to the driver’s seat.

“I’ve been driving quite a bit but mostly when it comes to testing,” Setzer said. “I don’t think I’ll be too shabby in the seat but there might be some rust on race day. Hopefully it all comes back, and we’ll have a good weekend.”

Setzer added that Sawalich’s maturity at a young age has made him a very valuable part of the family-owned program, which in turn has provided Setzer knowledge on how to improve upon his own driving style.

Sawalich’s wire-to-wire victory in the most recent CARS Pro Late Model Tour outing at Hickory Motor Speedway only has Setzer more confident in the ability of his cars to contest for wins against drivers like Caden Kvapil and Luke Fenhaus throughout the 2022 season.

With momentum on his team’s side, Setzer is eagerly looking forward to adding a CARS Pro Late Model Tour win to his resume at Greenville-Pickens but knows that Kvapil and Fenhaus are going to provide a strong challenge as they each look to take control of the point standings.

“The competition is pretty strong,” Setzer said. “We just need to have the car right and make sure the driver doesn’t make any mistakes. If we can do both of those things, we’ll have a pretty good shot at the win.”

The inaugural CARS Late Model Stock Car Tour season for rookie Zack Miracle has not started the way he intended.

Despite showing speed at Caraway Speedway and Hickory Motor Speedway, Miracle saw potentially strong runs at both tracks get derailed by accidents outside of his control, which have relegated him to 31st in the point standings.

“These first two races have been very difficult,” Miracle said. “This is definitely not the way we wanted to start the season, but my guys have been working hard to keep bringing fast cars to the track every weekend and we’re looking forward to Greenville.”

Although Miracle wishes the first two races had played out differently, he has learned many valuable lessons on how to finish races and hopes to properly apply that knowledge starting with Saturday’s Puryear Tank Lines 225.

Miracle heads to Greenville-Pickens Speedway having never turned a lap there, yet he believes the track suits his driving style due to the long straightaways and overall lack of grip that is prevalent at other facilities he has raced at in South Carolina like Florence Motor Speedway.

The goal for Miracle on Saturday is to simply shake off the struggles that have hindered him since Caraway. He still has confidence in his equipment and is expecting Greenville-Pickens to be the race that gets his season back on the right trajectory.

The green flag for the Puryear Tank Lines 225 pres. by Harrison’s Workwear will get underway at 7:30 p.m. with the 100-lap CARS Pro Late Model Tour feature.