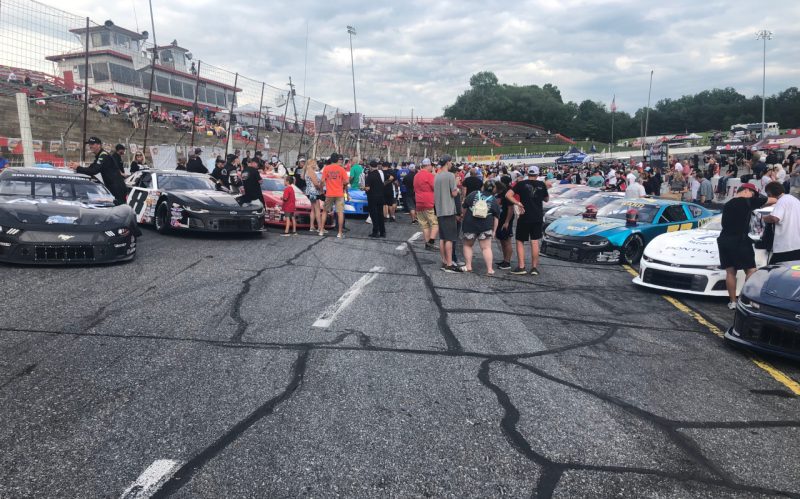 Just over a week after being the center of the motorsports industry at North Wilkesboro Speedway, the Solid Rock Carriers CARS Tour will be back in action at another storied North Carolina track in Tri-County Motor Speedway.

Having hosted races for the SMART Modified Tour, UARA STARS Late Model Series and many other divisions during its history, Tri-County will see the CARS LMSC Tour for the sixth time, while the CARS PLM Tour is making a second visit to the facility after previously running there in June.

The championship fight in the LMSC Tour is close to wrapped up with Carson Kvapil holding a sizable advantage, but the PLM Tour title is anything but secured as William Sawalich looks to further erase his deficit to Luke Fenhaus with his fifth consecutive win.

The euphoria from North Wilkesboro Speedway has not yet worn off for Mason Diaz.

Matching a career-best finish of second in front of a sold-out crowd at the historic facility became a career highlight for Diaz, who hopes to build on the momentum from Wednesday as the LMSC Tour visits Tri-County this weekend.

“I’m feeling great,” Diaz said. “We have had an up and down year with part failures. My crew at Mike Darne Racing and myself never give up and it shows. To have a strong run in that large of a stage with a crowd that large was truly amazing.”

Being able to defeat a NASCAR Hall of Famer like Dale Earnhardt Jr. is something that Diaz is not sure if he will be able to experience again, but he stressed that his primary focus is on the next race in front of him.

With only four finishes inside the Top 10 this year, Diaz wants to close out the 2022 season by establishing some much-needed consistency. He expects Tri-County to present plenty of challenges, as his only race at the track with the CARS Tour resulted in a 15th place run back in 2021.

Diaz wants nothing more than to finally break through for his first LMSC Tour win before the year concludes. He feels confident about his chances in the Harrison’s Workwear 225, especially since he believes Tri-County will share characteristics with other fast short tracks in the region.

“I think this can be the weekend,” Diaz said. “I have a feeling [Tri-County] is going to race similar to [South Boston] with the high grip in the corners. We had a strong run at SoBo during the last CARS Tour race and in the [Thunder Road Harley-Davidson] 200 back in July. Hopefully we can have another strong run this weekend.”

A familiar face is set to return to the CARS Tour on Saturday in two-time Super Late Model champion Matt Craig.

The 2022 season has seen Craig and his team maintain a focus on Super Late Model competition throughout the United States, but he is eager to race with the CARS Tour once again and hopes he can add a PLM Tour victory to his resume at Tri-County.

“There have been a lot of conflicts this year, but we finally got a weekend off,” Craig said. “It means a lot to be back because I really like the CARS Tour. However, if we spent all year racing Pros, we wouldn’t have a good enough notebook for the big Super Late Model races. This is still our home series, so I’m happy to come back.”

While Craig knows he is more than capable of winning, he expects Saturday’s PLM Tour feature to be much different compared to a standard Super Late Model event.

Craig said that more horsepower with a Super Late Model provides drivers more opportunities to pass each other on track. He added that Pro Late Models are more dependent on momentum, which forces drivers to be more aggressive by using the bumper.

Combined with the newly paved turns at Tri-County, Craig enters the Harrison’s Workwear 225 with a lot of unknowns. Despite this, Craig intends to utilize his experience on short track racing in the southeast to best the PLM Tour’s young but talented core of drivers.

“I want to be confident, but it’s kind of hard to be,” Craig said. “We haven’t been doing so good this year, and Tri-County was a good track for me before they repaved the turns. I don’t have as good a handle on the track now when it was old and wore out, so the confidence is kind of there, but kind of not as well.”

The last time Ryan Moore raced in the PLM Tour, he won in exhilarating fashion by edging Luke Fenhaus to the start-finish line at Franklin County Speedway.

Moore had been trying desperately to get to victory lane with the CARS Tour since making his first appearance in the defunct SLM division back in 2018. Now that he has a win, Ryan is ready to keep his momentum going starting at Tri-County on Saturday evening.

“I’ve been wanting to win a CARS Tour race for a while,” Ryan said. “I got a few podiums at different tracks around here, but it was on my bucket list to get a win with those guys since it’s a great tour. Hopefully we can add a few more before the year is over with.”

The son of 1995 ARCA Menards Series East champion Kelly Moore, Ryan has put together a successful racing career of his own just like his father. Along with making a handful of starts in the NASCAR Xfinity and Camping World Truck Series, Ryan has also amassed wins in ARCA East, the ACT Late Model Tour and the PASS South Super Late Model Series.

Ryan primarily views racing as a hobby these days but is still not afraid to challenge himself in different aspects. When he heard the CARS Tour was forming a Pro Late Model division, Ryan wanted to stay involved with the series and get reacclimated to those cars after years of competing in Super Late Models.

Although the transition back into Pro Late Models was initially jarring, Ryan has gotten more comfortable in the cars with every passing week and fully expects to be right in the mix for his second consecutive PLM Tour victory at Tri-County.

“I don’t go anywhere to run Top 5, I go to win,” Ryan said. “We’re going to come out to [Tri-County] guns blazing and definitely give it 100 percent.”

With only a handful of races remaining on the 2022 season, drivers in both CARS Tour divisions are running out of chances to fight for wins. The PLM Tour kicks off the fall stretch for the series with their 100-lap feature at Tri-County before the drivers of the LMSC Tour battle for 125 laps.