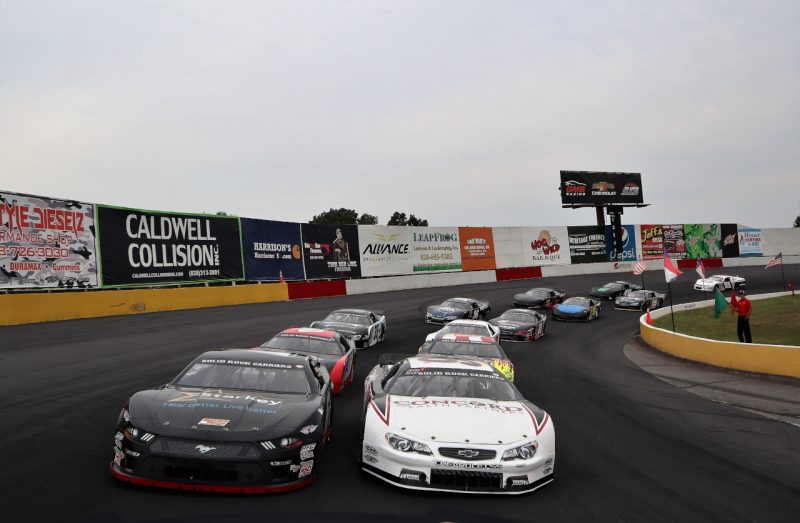 The next stop on the Solid Rock Carriers CARS Tour calendar will see the Pro Late Model Tour visit the quarter-mile bullring in Wake County Speedway.

Opened in 1962 as a clay dirt track by Glenn, Talmadge and Marvin Simpkins before being paved in 1987, Wake County remains a vibrant short track nestled away in North Carolina’s state capital of Raleigh. The track is now operated by Charlie Hansen, who was instrumental in getting Wake County sanctioned by NASCAR back in 2020.

In recent years, Wake County has begun hosting races for major sanctioning bodies that include the CARS Tour. Saturday’s GXS Wraps 100 will be the third time the series has visited the facility, which will see the promising young stars of the CARS PLM Tour test their skills around the track’s tight corners.

There is still no clear favorite in the CARS PLM Tour championship fight between Luke Fenhaus and Caden Kvapil following the Keen Parts 200 at Tri-County Motor Speedway.

Both Fenhaus and Kvapil had to fight for track position throughout the 100-lap feature but managed to get their cars inside the Top 5 by the time the checkered flag was displayed. With Fenhaus finishing one spot ahead of Kvapil, he now holds a six-point advantage in the series standings.

Fenhaus, who won the 2021 Slinger Nationals, has been able to hold his lead despite not yet winning a race in the CARS PLM Tour. Despite this, Fenhaus has not been without speed piloting Highlands Motorsports’ Pro Late Model, as he has claimed two poles and led 159 laps, all while maintaining a perfect record in the Top 5.

For Kvapil, he has also enjoyed a similarly efficient season, which began with a win in the Old North State Nationals at Caraway Speedway. The 12 laps Kvapil led at Caraway are all that Kvapil has led in 2022, yet he remains within striking distance of Fenhaus’ points lead with eight races remaining on the schedule.

The fight between Fenhaus and Kvapil for the inaugural CARS PLM Tour championship continues in Saturday’s GXS Wraps 100 at Wake County Speedway, where both will have to navigate a small margin of error on track to not lose any ground in the standings.

The GXS Wraps 100 at Wake County Speedway will have representation from the talented rookie class in the CARS LMSC Tour.

Carter Langley, who currently leads the CARS LMSC Tour Bilstein Rookie of the Year point standings, will make his debut in the Pro Late Model Tour on Saturday evening driving a car for Penn and Ashley Crim.

“It’s been fun driving different cars,” Langley said. “Getting seat time is always good for me when going to different tracks throughout the country.”

Through seven races, Langley has recorded three Top 10 finishes and completed the most laps of any other driver in the Bilstein ROTY battle with 915.

Langley has been able to remain competitive despite having to switch back to his family-owned operation in the RPM Group after initially joining Justin Johnson Racing for the 2022 season. Despite the adversity, Langley has been pleased with his progress and is optimistic he will find victory lane before the year concludes.

For Wake County, Langley is confident that he can excel on the track driving a car prepared by Penn. A season veteran in short track racing on the East Coast, Penn has already scored a Top 5 in the CARS PLM Tour as an owner at Franklin County Speedway with Cale Gale as the driver.

Langley wants nothing more than to win at Wake County for his sponsor GXS Wraps and Graphix Solution Inc. owner Stephen Dunn, which is why he is eager to hit the track this weekend and showcase his talent against the CARS PLM Tour regulars.

“I fell like my chances driving for Penn Crim are great,” Langley said. “He has a good car and a great crew working to make it fast every week. It would mean the world just being able to win in general, but GXS Wraps being the head sponsor would make it even better.”

A busy night of racing is coming up at Wake County with on-track action beginning at 7 p.m.. The facility’s Charger, Bandolero, Legend and Bomber divisions will all be racing alongside the CARS PLM Tour, which will be the fourth race on Saturday’s schedule.