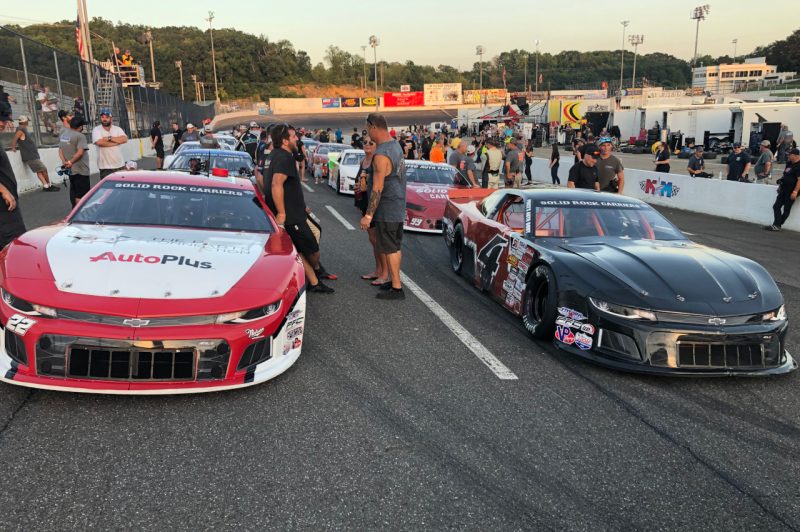 After spending the past several weeks in North Carolina, both divisions of the Solid Rock Carriers CARS Tour are travelling to Virginia for a weekend at Motor Mile Speedway.

Since its construction in 1952, drivers like Jeff Agnew, Mark McFarland, Lee Pulliam, and many more have all found success around the half-mile oval, which has also hosted races for a plethora of different sanctioning bodies that include the NASCAR Xfinity Series, ASA National Tour and the CARS Tour’s predecessor in the USAR Pro Cup Series.

Saturday’s Fluid Logic 225 will be the fourth time the CARS Late Model Stock Car Tour has visited Motor Mile, while the debut appearance of the series’ Pro Late Model division at the track will serve as another chapter in the championship battle between 2021 Slinger Nationals winner Luke Fenhaus and rookie Caden Kvapil.

An interesting trend has developed in both the CARS LMSC and PLM Tours with just a handful of races remaining.

Aside from Josh Berry taking home a checkered flag in the Puryear Tank Lines 225 at Greenville-Pickens Speedway in April, every driver that has visited Victory Lane in the CARS Tour this year has done so for the first time in their respective division.

In their rookie LMSC Tour campaigns, Connor Hall and Carson Kvapil have combined to win five of the nine races so far while Chad McCumbee finally broke through for his first win at Hickory after having supported the series on at least a part-time basis since the inaugural season in 2015.

Jonathan Shafer celebrated his maiden LMSC Tour victory at Ace Speedway in his third full-time campaign, while two-time Langley Speedway track champion Brenden Queen scored a popular victory in front of his hometown crowd in June, which came in just his second start.

While first-time winners like Caden Kvapil and Giovanni Ruggiero entered the PLM Tour during its debut season, other drivers like William Sawalich and Ryan Moore achieved that pivotal milestone after previously making appearances in the defunct CARS SLM Tour.

Each entry list for Motor Mile features plenty of talented drivers that have yet to win in the CARS Tour, which presents a strong possibility of the first-time winner trend continuing for at least another weekend.

Jacob Heafner’s first full-time venture into the CARS LMSC Tour has been filled with more positives than negatives.

Through nine races, Heafner currently sits just one point outside the Top 5 in the series standings, which he admits is a pleasant surprise after he and Carroll Speedshop struggled to find both consistency and good luck to open the year.

“We got off to a rough start in those first two races,” Heafner said. “That put us out of being in contention for the points, but we’ve rallied ourselves back with several Top 10s and a couple of Top 5s during the Virginia stretch. We’ve turned our season around and I’m looking forward to [Motor Mile].”

Heafner had never recorded a single Top 5 in his six LMSC Tour starts prior to 2022 but ended up tallying three in a row at Franklin County Speedway, Langley Speedway and Dominion Raceway, the latter of which saw him record a career-best finish of second.

The speed Heafner’s car has shown all year is something he attributed to the determination of his car owner Justin T Carroll and how he has been committed to going the extra mile. Heafner added that he and Carroll first noticed progress near the end of 2021 and have stayed on that trajectory through an adventurous season.

Although the last two starts for Heafner at Hickory Motor Speedway and Ace Speedway ended with runs outside the Top 10, he is not letting those two performances deter him and is confident that the Fluid Logic 225 at Motor Mile will finally be the race in which he parks one of Carroll’s Late Model Stocks in Victory Lane.

“I got my first win at Motor Mile in only my second start last season during one of their weekly races,” Heafner said. “The two times I’ve been there has been some of the most fun I’ve ever had in a car. Motor Mile is such a racy track, and the fans are always great, so I think we have a great shot to pick off a win.”

Saturday’s Fluid Logic 225 at Motor Mile will have representation from the top levels of NASCAR.

Garrett Smithley, who has 225 combined starts in the NASCAR Cup, Xfinity, and Camping World Truck Series, will compete in his first CARS PLM Tour race driving a car prepared by E33 Motorsports, which he had originally planned to pilot at North Wilkesboro Speedway until that race was cancelled.

“We weren’t really sure about running North Wilkesboro but decided to do it since the test went so well,” Smithley said. “Obviously, we went back to the drawing board to see where our next opportunity was, and Motor Mile seemed like a good fit. That track suits my driving style, and I was off on the NASCAR side that weekend, so now we’re going to have some fun.”

Despite having only raced in a handful of Late Model races in his career, Smithley has enjoyed every chance to compete in the discipline and is eager to assist E33 Motorsports with their burgeoning operation.

Smithley is expecting Saturday’s PLM Tour feature at Motor Mile to be dependent on momentum due to their reduced horsepower as opposed to the Super Late Models but added that the amount of grip the cars possess enable drivers to be more aggressive behind the wheel.

The tests Smithley took part in at North Wilkesboro and Hickory have provided him plenty of notes to study ahead of the Fluid Logic 225. He does anticipate a win coming easy on Saturday but believes he and E33 Motorsports can be competitive against the series regulars as long as they execute with their setup and in race conditions.

“All of these guys are really tough competitors, and you have plenty of good teams here [in the PLM Tour],” Smithley said. “We’re a smaller team that’s building and I have tempered my expectations. I like to think we have every opportunity to compete for a win, but it all comes down to whether we have the car to do so.”

The on-track action for the Fluid Logic 225 is set to begin at 7:30 p.m. on Saturday evening. Opening the night will be the 100-lap CARS PLM Tour feature, which will be followed by 125 laps of racing for the CARS LMSC Tour.