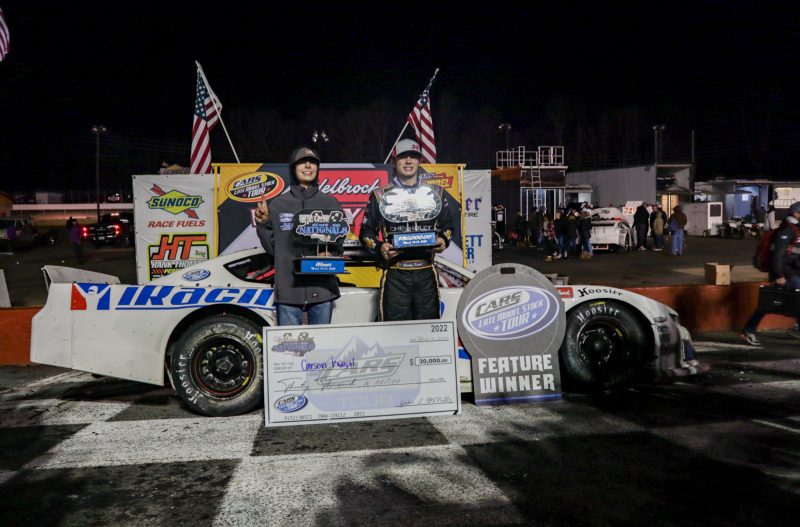 Sunday evening in the Puryear Tank Lines Old North State Nationals pres. by GXS Wraps at Caraway Speedway was a family affair for the Kvapils.

The youngest of the Kvapil brothers in Caden kicked off the day by winning the first race in the history of the CARS Pro Late Model Tour before Carson completed a clean sweep by holding off Kaden Honeycutt in the closing laps of the CARS Late Model Stock Car Tour feature to bring home $30,000.

Carson did not believe he would even be in the conversation for a victory when the final controlled caution of the Old North State Nationals was displayed at Lap 140.

The decision to stay out while other top contenders in Honeycutt and Deac McCaskill worked to the advantage of Carson, who had to survive a relentless assault from the former in order to get his first career CARS Late Model Stock Car Tour victory with JR Motorsports.

Carson knew it was only a matter of time before he found victory lane in one of Dale Earnhardt Jr.’s Late Models but was in disbelief that the occasion took place in one of the CARS Tour’s most prestigious events.

“Everybody was thinking about this race over the offseason,” Carson said. “We finished fourth, third and second during my first three races with JR Motorsports and we joked around that I would finish first [in the Old North State Nationals]. Everything turned out great and we got it done.”

When the fateful call came, Carson was skeptical that his car would be strong enough to stay out in front for the last 60 laps.

Having struggled to work his way to the front all day, Carson’s woes were compounded when he contacted the wall with 82 laps remaining. Despite this, Carson’s crew assured him that staying out was the only realistic shot they had at winning the Old North State Nationals.

Once Carson did everything necessary to keep Honeycutt behind him, he became more focused on being perfect at each end of the track while simultaneously worrying about whether he would have to survive a green-white-checkered attempt.

“I was getting a little nervous there at the end,” Carson said. “With every single race we’ve nearly won before, it always seemed like something would happen like a late-race caution or another issue. We got lucky and fortunate that this race ultimately went green to the checkered flag.”

Carson’s triumph on Sunday proved to be another bitter defeat for Honeycutt at Caraway.

While a bad restart cost him an opportunity to hoist his first CARS Late Model Stock trophy at the track last year, Honeycutt said that a late-race incident between him and the lapped car of Conner Jones inside of 20 laps to go stymied the progress he made towards catching Carson for the win.

“I don’t understand why certain people are the way they are,” Honeycutt said. “[Conner] chose to do what he did but I’m not going to get into it. [Nelson Motorsports] gave me a great race car and I thought we were the best all day. The adjustments [Carson] made paid off at the end and they were a little better than we were.”

As with everyone else on Sunday, Honeycutt and Nelson Motorsports worked tirelessly to devise a strategy that would put them in the best position to win.

After staying out during the second controlled caution on Lap 97, Honeycutt pitted to put on two fresh tires for the final stint. The challenge for Honeycutt was getting his No. 12 Autos By Nelson Chevrolet loose enough to where it could find speed off the corners and quickly work through traffic.

Even though Honeycutt believed more could have been done to make his car looser, he was adamant that Sunday could have still turned out in his favor had Jones not impeded his progress while he was searching for a lane around Carson.

Honeycutt does not intend to linger on the Old North State Nationals for long and is already turning his attention towards Hickory Motor Speedway in two weeks, where he fully expects to battle Carson for the win once again.

“[Carson] won at Hickory when he was there last year,” Honeycutt said. “We’re going to have a good baseline going into Hickory, but we just have to execute, manage our tires and keep our momentum going with a win.”

Caden Kvapil Makes His Own History

One of the best parts of winning Sunday’s Old North State Nationals for Carson was sharing the moment with Caden after he had won just a few hours earlier.

Like Carson, the path to victory for Caden on Sunday was far from an easy one, as he had to overtake MPM Rookie of the Race Luke Fenhaus on a late-race restart and subsequently withstand every single challenge from the 2021 Slinger Nationals winner to make the idea of a Kvapil family sweep a reality.

“This is really big,” Caden said about his win. “We were really struggling in the beginning and frankly the car just wasn’t great the entire race. That last restart saved us and we capitalized on the chance.”

Caden was several seconds behind the lead duo of Fenhaus and Clint King when the latter suffered a blown tire with 12 laps remaining; setting up the final sprint.

On the ensuing restart, Caden drove his car hard into Turn 2 on the outside while also taking advantage of Fenhaus slightly slipping up the track. Caden managed to pull ahead but could not successfully pull away from Fenhaus, who wanted the lead back after leading most of the feature up to that point.

The closing stages of Sunday’s CARS Pro Late Model Tour feature were some of the most stressful Caden has dealt with in his brief career but he counted on his father in former NASCAR Camping World Truck Series champion Travis Kvapil to help him play defense against a veteran like Fenhaus.

Carson and Caden Optimistic About 2022

Each Kvapil brother expressed optimism over potentially duplicating Sunday’s family celebration on weekends where the CARS Late Model Stock and Pro Late Model Tours race alongside each other.

Consistency was a goal that Carson wanted to establish in his first year with JR Motorsports after claiming a CARS Super Late Model Tour title the year before. Now that he has a win under his belt, Carson is confident that he can become the second driver to win a title in two different CARS Tour divisions alongside Jared Fryar.

“This is such a confidence booster,” Carson said. “In the four races I’ve ran [with JR Motorsports], I probably should have won two of them. This will help me build trust with the guys and I left it up to them on what changes needed to be made during the pit stops, so the confidence will only get better from here.”

As for his $30,000 paycheck, Carson intends to keep that money confined to himself and JR Motorsports while Caden enjoys the $4,000 he received for winning the CARS Pro Late Model Tour feature.

“[Caden] isn’t getting any of that money,” Carson said. “He’s got the Pro Late Model Tour check.”