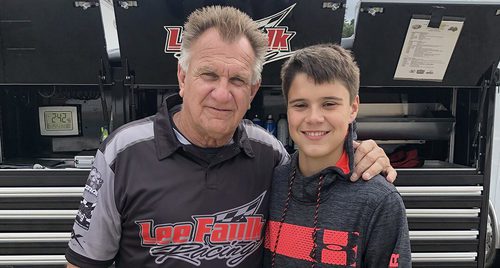 King, a 14-year-old native of Clear Lake, Iowa, will contest the full CARS Pro Late Model Tour schedule for Lee Faulk Racing and Development. It’ll be his first full season of racing in the Southeast in a stock car.

“The plan was always to run a full schedule with Lee Faulk Racing this year, but when the CARS Tour announced they were launching a pro late model series, it made a lot of sense to focus on that series,” said King. “I expect there to be a lot of competition with veteran drivers. I’m looking forward to learning as much as I can from them. Having the guidance of the Faulk’s will really help give me a competitive edge as I try to win the Rookie of the Year Award.”

King is an experienced racer who began his career in go karts, earning multiple victories and championships along the way. He eventually moved up to Bandolero and Legend cars and in 2019 he earned the INEX Bandolero Bandit National Touring championship.

“We’re really looking forward to working with Kody for the entire season,” said Lee Faulk Racing and Development’s Michael Faulk. “We got limited time with him last year and he was impressive then, so we’re excited to see how much he can improve throughout the full season with the CARS Tour.”

King was originally scheduled to compete in several events for Lee Faulk Racing and Development last year, but an injury away from the race track kept him out of action for several months and derailed his plans for the season. He’s now back to 100 percent and ready to go racing.

“I hated not being in a race car as much as we had planned last year,” said King, who returned to the cockpit and earned his first late model win last August at Hawkeye Down Speedway in Cedar Rapids, Iowa. “I’m really glad to be getting back behind the wheel more in 2022.”

In addition to his plans with Lee Faulk Racing and Development, King will also be competing in select events back home in the Midwest in the Kody King Motorsports late model. He plans to compete in the Crown Jewel Series events at Hawkeye Downs Speedway as well as select Big 8 Late Model Series races.

“The goal is to get as much experience as possible, so when I’m not racing my late model with Lee Faulk Racing we’re going to try and run races back home too,” King said. “It’s going to be a busy year, but we’re all looking forward to it.

“Thanks to my mom, dad and grandparents for supporting me and for the team at Lee Faulk Racing for getting me ready for the 2022 season. I also can’t forget MPM Marketing and Tonya McCallister, who have been so helpful and supportive these last few years. Last but not least, I want to thank all my marketing partners. Now let’s go racing!”