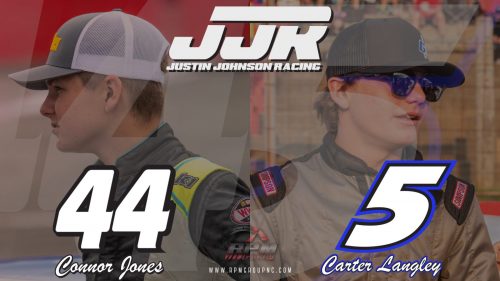 MOORESVILLE NC – Justin Johnson Racing has announced the signing of two young up and coming drivers to compete full time in the CARS Tour as well as NASCAR’s Virginia Triple Crown events in 2022. Conner Jones (15) will pilot the #44 car, while Carter Langley (17) will be behind the wheel of his familiar #5 for the 2022 campaign.

JJR president Justin Johnson stated, “We could not be more excited about having both Conner and Carter behind the wheel of our cars in 2022. Both young men have shown a great deal of promise and we are committed to helping both to develop into better drivers and more importantly young men in 2022. I feel like with the driver and crew chief combinations we have in place, we will compete for wins every time we go to the track.”

Conner spent the majority of 2021 competing in the CARS Tour, compiling three top ten finishes. The Fredericksburg, VA native piloted cars for Mike Darne Racing, GMS and Jr. Motorsports before ending the season with JJR. He finished off 2021 with a 5th place finish in the Battle of the Stars event at Goodyear All-American Speedway and a solid 3rd place finish in the Race of Champions at Carteret County Speedway. Jones also finished second in the Pro Late Model World Series at New Smyrna (FL) last February.

When asked about joining JJR for the 2022 season Jones stated, “I am excited about the opportunity to work along Justin and Jason. We have already started to build a great relationship and notebook after finishing last season with JJR. I feel like I will have a car every week capable of winning and I can’t ask for much more than that.”

Jones will be under the watchful eye of veteran crew chief Jason Stanley in 2022. Stanley spent the 2021 campaign with CARS Tour Rookie of the Year and Championship runner up Kaden Honeycutt. The combination won two (Langley and Florence) CARS Tour races along with a pair of NASCAR wins at Hickory Motor Speedway in 2021. When asked about working with Jones in 2022 Stanley added, “Conner has a lot of potential, and I am excited to work alongside him. Being able to start building a relationship with him at the end of 2021 will be very helpful as we start out 2022. Our goal at JJR is to develop young drivers and we are grateful for the opportunity to work with Conner.”

In addition to his LMSC schedule with JJR in 2022, Jones has also secured a three race deal with Venturini Motorsports running an ARCA Menards East Series event at Dover (April) as well as two ARCA Menards Series races at Iowa Speedway (June) and Salem Speedway (October).

In his first full time season running late model stock cars, Carter spent the majority of 2021 competing at South Boston Speedway where he consistently ran in the top five while capturing his first career LMSC pole at the track August 21st. He also competed in two CARS Tour events – his first with JJR, finishing 10th at Tri-County Speedway while capturing a sixth-place finish in the season finale at South Boston. Along with a 17th place finish in the Valley Star Credit Union 300 at Martinsville Speedway in his first ever attempt, the Zebulon NC native also score a pair of fourth place finishes at the Rodney Cooke Classic (Ace Speedway) and the Battle of the Stars (Goodyear All-American Speedway) to cap off 2021.

Langley spoke of his 2022 plans with JJR saying, “I am extremely grateful for this opportunity to represent my sponsors and family behind the wheel of a JJR car. Justin has built an amazing program in a short period of time, and I am ready to work with them to become a better driver. The preparation and detailed approach JJR goes to the track with will give us a chance to win every weekend. Our goal is to compete every race, win races, and contend for the CARS Tour Rookie of the Year and championship.”

Langley will be paired alongside up and coming crew chief Joshua Yeoman for the 2022 campaign. The two worked together in 2021 at Martinsville, South Boston in the CARS Tour finale and at Goodyear All-American Speedway in the Battle of the Stars. Yeoman commented on the upcoming season with Langley stating, “I am excited to have the opportunity to work with JJR and Carter Langley once again. I was fortunate to have the chance to work with Carter at the end of 2021 and was impressed with his ability behind the wheel. We learned so much in the short time working together which will be an advantage for us going into 2022.” Yeoman closed stating, “That’s what makes this exciting for me, knowing we are capable of winning races and competing for the CARS Tour Rookie of the Year and Series Championship.

In addition to his 18-race schedule with JJR, Langley also plans to potentially compete in a handful of Pro Late Model events in both the Carolina Pro Late Model Series and the CARS Tour. He also may run a limited number of LMSC events with his family team at South Boston Speedway.