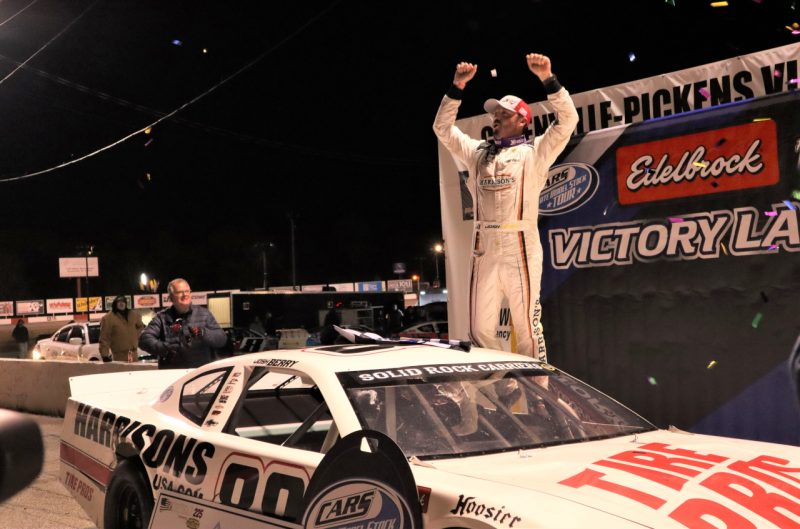 Nothing was ordinary for the CARS Tour as both divisions took part in the Puryear Tank Lines 225 pres. by Harrison’s Workwear at Greenville-Pickens Speedway.

From power outages to intense racing, the drivers of the CARS Late Model Stock Car and Pro Late Model Tours faced every obstacle imaginable as they battled each other on track and the unseasonably cold weather conditions that befell the track on Saturday night.

Giovanni Ruggiero proved to be untouchable through the entirety of the Pro Late Model feature while former CARS Late Model Stock Car Tour champion and all-time wins leader Josh Berry returned from his full-time NASCAR Xfinity Series duties to add another victory on his storied resume after a heated battle with Layne Riggs.

Josh Berry was itching to get back behind the wheel of a Late Model Stock following a frustrating 19th place finish at Martinsville Speedway in the NASCAR Xfinity Series on Friday night.

The path to victory at Greenville-Pickens Speedway proved to be a lot tougher than Berry initially expected, as he had to fight wheel-to-wheel with Layne Riggs for several laps until he finally took advantage of a late spin from Riggs to pull away with his 22nd career CARS Late Model Stock Car Tour victory.

“We were good, but we needed to be a little bit better,” Berry said. “Hats off to all these guys and I’m so thankful that I get to race with them. Hopefully Dale [Earnhardt Jr.] was watching and he’ll let me keep driving his Late Models.”

Berry did everything possible to pass Riggs cleanly during the closing stages, who managed to hold the lead after the competition caution on Lap 50 by primarily utilizing the top groove.

With neither driver giving the other any breathing room, contact between Berry and Riggs was inevitable as the laps wound down. That moment came with 18 laps remaining when slight contact between the two forced Riggs to back off going into Turn 3, where he was subsequently spun by Berry’s teammate in Carson Kvapil.

Despite this, Riggs maintained track position and briefly took the top spot back. Unfortunately for Riggs, the performance of his car was hindered by the worn tires, and he rapidly lost time to Berry before the checkered flag flew.

While Berry was disappointed to see Riggs lose control of his car, he was thrilled to simply visit victory lane again in a Late Model Stock and hopes that Saturday’s win provides him momentum that carries over into the rest of the Xfinity Series season.

“This definitely doesn’t hurt,” Berry said. “The last few weeks have been tough, but this is who I am. I’m a short track guy and I’ve done this stuff for a long time. It’s always fun to win and this money will be a great addition for the Late Model program.”

One of the first people to congratulate Josh Berry in victory lane at Greenville-Pickens Speedway was Layne Riggs.

Although the late contact between him and Carson Kvapil eliminated his hopes for a win, Riggs said his clean but aggressive battle with Berry was one of the best he has ever been a part of and perfectly encapsulated everything great about the CARS Late Model Stock Car Tour.

“No matter what, that was the most fun I’ve ever had in a racecar,” Riggs said. “There couldn’t be two better drivers to put on a show like that for everybody.”

Riggs understands that Berry sets a very high standard for all Late Model Stock competitors every time he enters a race.

Those occasions are now much more infrequent with Berry chasing a NASCAR Xfinity Series title, which is why Riggs was thrilled when he heard that the acclaimed Late Model Stock driver was setting aside time in his busy schedule to return to the CARS Tour.

While Riggs would have preferred coming away from Greenville-Pickens victorious over Berry, he admitted that Saturday’s race served as a great measuring stick for his program following a strong start to the 2022 season that includes three victories at South Boston Speedway.

With confidence on his side, Riggs has every reason to believe the wins will start accumulating as he attempts to chase down Kvapil for the lead in the CARS Late Model Stock Car Tour point standings.

Ruggiero did not make a single mistake after qualifying his No. 81 Anthony Campi Racing Ford on the pole at Greenville-Pickens Speedway, as he led every single lap before a power outage brought the Pro Late Model Tour feature to a premature end after 87 laps.

“We were riding down the backstretch and all of a sudden, we couldn’t see that well,” Ruggiero said. “It’s unfortunate that’s how the race ended but it is what it is. We had such a fast car all weekend and really dominated, so I have to give a big thanks to Anthony Campi and everyone who helps on the car.”

Ruggiero anticipated that the Puryear Tank Lines 255 at Greenville-Pickens would involve plenty of trial and error, as he had never seen the facility prior to the weekend.

Instead of enduring struggles, Ruggiero immediately got comfortable with his car and posted the fastest lap in each of the two practice sessions. Ruggiero’s speed carried over into what became an 87-lap feature, with his only challenge coming from Caden Kvapil on a mid-race restart.

Ruggiero said that his solid year, which also includes a Pro Late Model win in the World Series of Asphalt at New Smyrna Speedway, would not be possible without the commitment Campi puts in towards ensuring that he has all of the essentials to be competitive each and every week.

“During the race, we just checked out,” Ruggiero said. “The car was feeling really good all weekend and the balance was always right. Anthony and everyone else on the team just worked really hard to make those positive changes.”

Following three consecutive combination events, the CARS Pro Late Model Tour will get a month-long break before returning to action at Franklin County Speedway on May 21. The next event for the CARS Late Model Stock Car Tour will see the division make its inaugural trip to Goodyear All American Speedway in Jacksonville, North Carolina on Apr. 23.