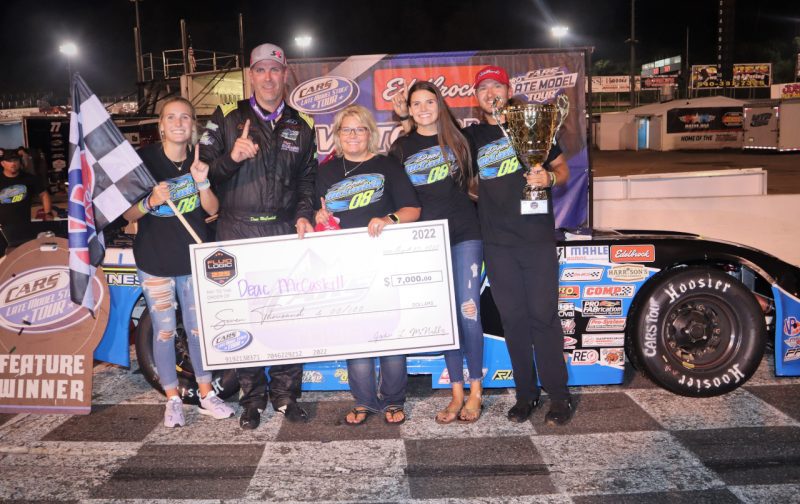 William Sawalich once again showed he was the class of the CARS PLM Tour field by nabbing his fifth victory on the season, while seasoned veteran short track competitor Deac McCaskill enjoyed a dominant outing to become the seventh different winner in the CARS LMSC Tour this year.

On a night dominated by close racing and hot tempers, Carson Kvapil further solidified his status as the favorite for the LMSC Tour championship. Luke Fenhaus left Motor Mile with the PLM Tour points lead, but now finds himself under more pressure from Sawalich.

Deac McCaskill fulfilled his role as the elder statesmen of the CARS LMSC Tour on Saturday evening at Motor Mile.

Having supported the series since its inception, the 2016 LMSC Tour champion put together a vintage performance by dominating the Fluid Logic 225, which is something McCaskill did not think was possible when he first unloaded his car on Friday.

“We were terrible yesterday,” McCaskill said. “We went back to the hotel room, and we all came together on the setup. It drove really good off the trailer this morning, but I didn’t know we had a winning car. This thing was so dominant, and we had to do some things to it that I never thought we’d have to at Motor Mile. What a night.”

McCaskill credited his victory on Saturday to everyone that has continued to help him throughout his career but made sure to dedicate it to his wife Sandy.

When Sandy suffered a series of strokes in 2018, McCaskill immediately shifted his focus away from auto racing and made sure he was alongside his wife through the recovery process. McCaskill admitted there were plenty of stressful nights, but knew Sandy was strong enough to overcome the odds against her.

During the past four years, McCaskill has also worked tirelessly to maintain consistency with his own Late Model Stock operation. He said that Saturday’s victory at Motor Mile is a culmination of the hard work he and everyone on his crew puts in each week.

Having Sandy be the first to greet him in victory lane made the occasion all the more special for McCaskill.

“[Sandy] has come a long ways,” McCaskill said. “No wheelchair, no walkers, no canes, she’s back on flip flops. This is truly a living miracle here. She pushes me so hard on this race car along with both of my daughters. I’m 45 years old next month and I’m still digging. Kevin Harvick did it the other week and that lit a fire under me, so it’s really cool to still run with these young kids.”

A quiet but solid outing for Kaden Honeycutt in the Fluid Logic 225 at Motor Mile ended on a sour note coming to the checkered flag.

While battling with Conner Jones for the sixth position, Honeycutt was left with significant left-front damage after getting pinched into the outside retaining wall, prompting him to confront Jones and his crew over what transpired.

“It doesn’t make any sense,” Honeycutt said about the accident. “I pointed at the crew and told them they have to understand how things work around here. Now I have to put this car back together with [Nelson Motorsports]. We had an awesome car tonight, and we’re just going to move on to North Wilkesboro on Wednesday.”

Saturday’s Fluid Logic 225 was not the first time Honeycutt and Jones have come together this year, as Honeycutt voiced his frustration over Jones after believing he held him up while racing Carson Kvapil for the win in the Old North State Nationals at Caraway Speedway.

Their paths crossed again during the final laps of Saturday’s LMSC Tour feature at Motor Mile. Jones said that he did everything to race Honeycutt cleanly for the sixth position but did not believe Honeycutt reciprocated that notion.

Jones added that it was not his intention to make contact Honeycutt on the frontstretch but feels that Honeycutt shares an equal amount of responsibility for what transpired.

“It’s really hard to say what happened,” Jones said. “Once [Honeycutt] and I got together, it grabbed the wheel out of my hand. That turned us both into the wall, but he drove me down into [Turn] 1 four times and I don’t think that’s right. I passed him clean the first time and I expected him to pass me clean the second time, but instead I came down in front of him and he just punted me.”

Honeycutt did not share Jones’ viewpoint on what happened during the final lap and is convinced that Jones put him into the wall intentionally on the last lap. He does not intend to linger on the accident for long and is ready to showcase Nelson Motorsports’ improved speed moving forward.

“It’s really not that hard to figure out,” Honeycutt said. “I’ll let the spectators have their own POV on it, but they should know the answer. We’ve still got our backup for North Wilkesboro like we planned, so we’ll probably use that car for a while. Now we’ll just go [for the win] at Wilkesboro.”

Four wins in a row for William Sawalich

The last time William Sawalich did not lead a lap in the CARS PLM Tour came at Franklin County Speedway back in May.

Since finishing fifth that night, Sawalich has led 375 consecutive laps in the series, which included his fourth consecutive wire-to-wire victory on Saturday evening at Motor Mile. The win was far from easy for Sawalich, who had to hold off a hard charging Katie Hettinger while navigating his way through slower traffic.

“I was a little concerned because the car kept getting tight,” Sawalich said. “[Hettinger] had a really good car, so I tried to stay as consistent as I could while hoping she would mess up.”

A mistake did not end up costing Hettinger a shot at her first PLM Tour victory, but rather a mechanical issue that developed late.

Hettinger had begun to run lap times faster than Sawalich and nearly got to his back bumper before her car began to lose power. Despite this, Hettinger was in high spirits after salvaging a runner-up finish in just her second appearance with Highlands Motorsports.

“I’m very happy to [come home] in second,” Hettinger said. “During those last five laps, my car started shutting off and we did not know why. In my opinion, if I was right under William, I probably would have had him. It just didn’t work out that way, but my team busted their butts all day, and I’m glad I could come home in second for them.”

With Sawalich still untouchable in the PLM Tour, he now has a realistic shot to run down Luke Fenhaus for the championship even though he missed a race at Greenville-Pickens Speedway on Apr. 9.

The mindset for Sawalich and Setzer Racing Development remains the same over the final four races of the 2022 PLM Tour season, which is to maintain the same confidence and composure that has guided them to victory lane five times together.

“I’m still coming here to win races,” Sawalich said. “My goal is to do my best, get the pole and lead every single lap.”

As the PLM Tour takes a brief break, the LMSC Tour will make history on Wednesday evening as they travel to North Wilkesboro Speedway for the Window World 125, which will be the final race for the facility’s old pavement before being it is converted into a temporary dirt track for October.