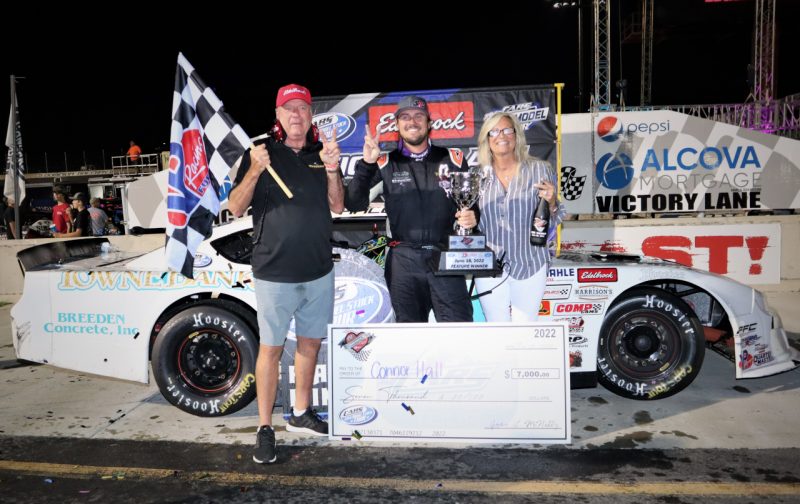 Several top contenders saw their evenings get derailed by misfortune, yet a familiar face in the form of Connor Hall managed to survive the chaos and hold on for the win, which is his second in seven career CARS LMSC Tour starts.

The victory makes Hall the second repeat winner on the 2022 CARS LMSC Tour season alongside points leader Carson Kvapil, providing him some much-needed momentum as he tries to make a run for the championship in his debut season.

Connor Hall finding his comfort zone in the CARS Tour

Nothing about Saturday’s victory at Dominion Raceway came easy for Connor Hall.

Along with battling the heat, his car and the track, Hall found himself under constant duress during the closing laps, as several late restarts forced him to battle off several drivers who were desperately searching for their first victory of the year.

“I knew [Jacob] Heafner and [Kaden] Honeycutt were coming, so we had to execute on every restart,” Hall said. “We had a really good car, but we were really loose all weekend. My crew chief looked at me and said we were either going to be really good or really loose, but it’s just such a privilege to drive for these guys.”

Hall entered his rookie CARS LMSC Tour season with every intention to win as many races as possible, but he knew that battling the series regulars would be very demanding from a physical and mental standpoint.

While Hall was able to break through for his first win at Goodyear All American Speedway, he admitted that 2022 has been far from perfect. Hall particularly singled out the AutosByNelson.com 225 at Franklin County Speedway, where late contact between him and Mike Looney for the lead took both out of contention.

The two week break from the CARS LMSC Tour gave Hall and his crew some much needed time to regroup for Dominion and properly utilize the knowledge from the opening races to put together a race-winning car on Saturday evening.

“These never get easier,” Hall said. “Honestly, Franklin [County] was a very humbling experience. I got into a slap fight earlier in the race and that cost two good cars a chance at a win. I thought we were going to be a little better at Langley [Speedway], but we came into [Saturday] with a good attitude and it paid off.”

Jacob Heafner entered the Virginia is for Lovers 125 at Dominion Raceway just under a month removed from his career-best finish of third at Franklin County Speedway.

Heafner eclipsed that milestone by one position on Saturday to finish second behind race-winner Connor Hall, which he accomplished after methodically working his way through the field from a disappointing 18th place qualifying effort.

“I probably needed to start about 10 or 15 spots better,” Heafner said. “I really shot myself in the foot in qualifying. We didn’t have crazy fast speed in practice, but I told my guys that the car was driving really good. They did a good job keeping me confident.”

With his second-place run, Heafner continues a career season in the CARS LMSC Tour that has now seen him tally three consecutive Top 5 finishes.

Heafner knew this kind of consistency was always possible ever since he started running in the series part-time back in 2018 and is thrilled to see the hard work put in by himself, car owner Justin T. Carroll and his crew pay off over the past few races.

Now that he has a runner-up finish on his CARS LMSC Tour resume, Heafner is eager to finally pick up his first career victory, adding that better speed in qualifying will be essential towards outrunning Hall, Carson Kvapil and the other top teams on a weekly basis.

“This car was a rocketship in the race,” Heafner said. “I think I used a little too much tire late in the run but I can’t thank all the Carroll Speedshop guys enough. This was a great points night and hopefully we can get us a win here soon.”

All Chad McCumbee needed to get back into the CARS LMSC Tour title fight over the second half of the season was consistency and good fortune.

Luck would not be on McCumbee’s side in Saturday’s Virginia is for Lovers 125 at Dominion Raceway. A broken driveline with 33 laps remaining ended up relegating McCumbee to 20th and placing him in a much deeper hole against points leader Carson Kvapil.

“I started hearing some funny sounds,” McCumbee said. “I’m not exactly sure what happened but something in the driveline definitely broke, so I’m really bummed.”

Despite entering Saturday second in the point standings, McCumbee still found himself facing a huge deficit to Kvapil, which stemmed from a mechanical failure he sustained in the Old North State Nationals at Caraway Speedway.

The rest of the 2022 season has seen McCumbee meticulously make up that lost ground. He won his first CARS LMSC Tour race at Hickory Motor Speedway and was in a position to win during the most recent event at Langley Speedway before ultimately settling for third.

While Kvapil having issues of his own cushioned the blow for McCumbee, he needed to be on track during the closing laps to fully take advantage of the opportunity and departs Dominion wondering what the title fight would look like had his driveline not failed.

“I’m really bummed because I really like [Dominion],” McCumbee said. “We had a really good car but this puts a big damper on the points situation, but we’ll just have to keep putting the work in now.”

A nice, month-long break is coming up for the CARS LMSC Tour before their next race on July 30, which will be the prestigious Throwback 276 at Hickory Motor Speedway.