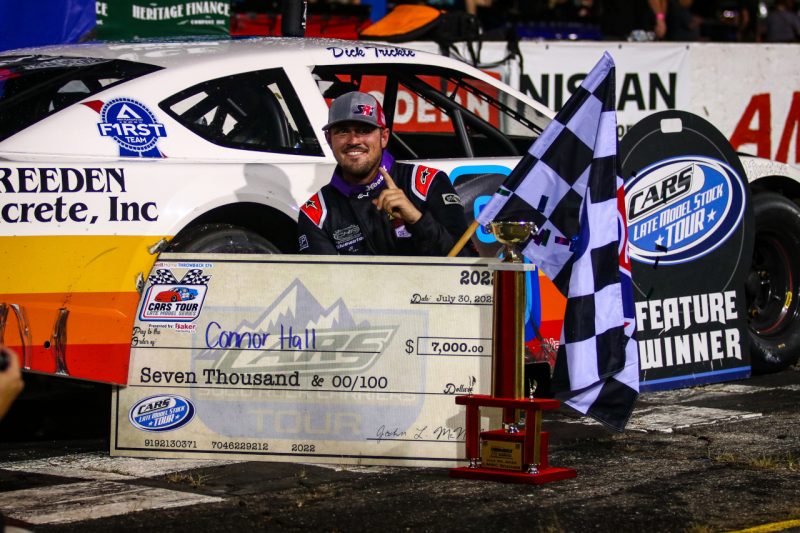 Everyone who patiently waited an extra week to see the conclusion of the Throwback 276 at Hickory Motor Speedway got exactly what they wanted and more on Saturday evening.

The final laps of the 138-lap Late Model Stock feature saw veteran Connor Hall desperately try to overtake rookie William Sawalich for the lead, who had led most of the race after starting on the outside of the front row alongside Hall.

Experience ultimately prevailed when the checkered flag, as Hall withstood both an offensive and defensive gauntlet from Sawalich to bring home the victory in his Dick Trickle-inspired paint scheme; his third on the 2022 Solid Rock Carriers Late Model Stock car season.

Nothing came easy for Connor Hall as he battled William Sawalich for the opportunity to add his name to the growing list of Throwback 276 winners.

Despite colliding with Sawalich on a couple of occasions in the closing stages, Hall still managed to deliver another victory for Chad Bryant Racing on Saturday, who he credited for providing him a stellar Late Model Stock that had been destroyed in a major accident in the Thunder Road Harley-Davidson 200 at South Boston Speedway in July.

“I think this one actually tops the first one,” Hall said. “This car was absolutely killed after South Boston but these guys thrashed to put it back together in two weeks. We didn’t test before showing up last week, but we got it done.”

The speed was prevalent in Hall’s car when he set the fastest time in qualifying the week before, but he elected to surrender the lead to Sawalich during the closing laps so he could conserve his tires for the end of the feature.

Once he felt comfortable to start being aggressive, Hall methodically climbed his way from just outside the Top 5 to second with less than 20 laps remaining, leaving Sawalich as the only driver standing in the way of a victory.

Hall never expressed any concern about racing Sawalich for the win, as he knew the 15-year-old would be clean, yet steadfast in deciding which of them would be celebrating in Victory Lane.

“I race [William] on opening night [at Hickory],” Hall said. “We had a pretty hectic battle in the second twin race. I don’t know a ton about William, but he’s someone I feel like I can trust to race me well. I know how I can race him and how he races me, and we put on an incredible show.”

William Sawalich comes up one spot short of Throwback 276 sweep

Had William Sawalich held off Connor Hall, he would have become the first driver in the history of the CARS Tour to sweep both races in one event.

Instead, Sawalich was left to wonder what could have been in Saturday’s Throwback 276, yet he came away from Hickory more confident and determined to defeat the CARS Tour regulars the next time he climbs into a Late Model Stock.

“I thought we paced the race well,” Sawalich said. “During those last 30 laps, I think the lapped cars got in our way and our right rear was worn. [Hall’s] right rear was worn as well, but that was just a good race. I learned a lot exchanging some bumper tag. I’m disappointed, but I’m happy knowing we could have won that race.”

Sawalich was not ready to hand Hall the win after enjoying a dominant evening. The two exchanged contact numerous times before one last aggressive move by Hall created enough separation that forced Hall to settle for second.

Despite the frantic nature of the finish, neither driver held hard feelings towards the other after the checkered flag flew, with Hall offering his praise towards Sawalich for the maturity he showed in the Throwback 276’s final moments.

“For being 15 years old, [Sawalich] is really good,” Hall said. “He’s going to be something special one day. I’m getting up there in age, so maybe I can open up another door, but if not, I’m super happy with the Chad Bryant guys and hopefully I can be here for a long time.”

The last thing Sawalich wanted was to wreck Hall for the win. He added that being patient and smart have allowed him to claim victories in both Super Late Models and Pro Late Models; a strategy that he does not plan to deviate from as he chases a Late Model Stock checkered flag.

“I wanted to be as clean as possible,” Sawalich said. “Sometimes wrecks happen, but I don’t want to be known as that kid who wrecks everybody for the win. I want to be respected, but [the Throwback 276] has given me all kinds of confidence.”

Sawalich will not have to wait long for another chance to sweep a CARS Tour weekend, as he will enter both the LMSC and PLM Tour features at Ace Speedway on Aug. 12.

Despite claiming his third CARS LMSC Tour victory of the year, Hall is only expected to gain a marginal amount on Carson Kvapil’s points lead.

Hall admitted that he is not overly concerned about winning a CARS LMSC Tour championship following some early-season misfortunes. He said that wins are top priority for him and that getting back into the championship fight with Kvapil would just be a bonus.

“Everybody keeps asking me about the championship deal, but after we ran out of gas at Caraway and Greenville-Pickens, that really put a damper on our points chase,” Hall said. “We’ve been diligent and we’re going to try and stay away from the bad luck. I like Carson and we race well, so I don’t want to wish ill will on those guys. Hopefully we can be diligent and the two of us can be tied at the last race of the year.”

Although Hall faces significant odds in chasing down Kvapil for the CARS LMSC Tour championship, he is expected to be a factor in every single event as the series embarks on its final stretch of six races.

Fans eager to see more will not have to wait long for the next CARS Tour feature. Both the LMSC and PLM divisions will be back in action next Friday to tackle the 0.400 mile oval in Ace Speedway located in Altamahaw, North Carolina.