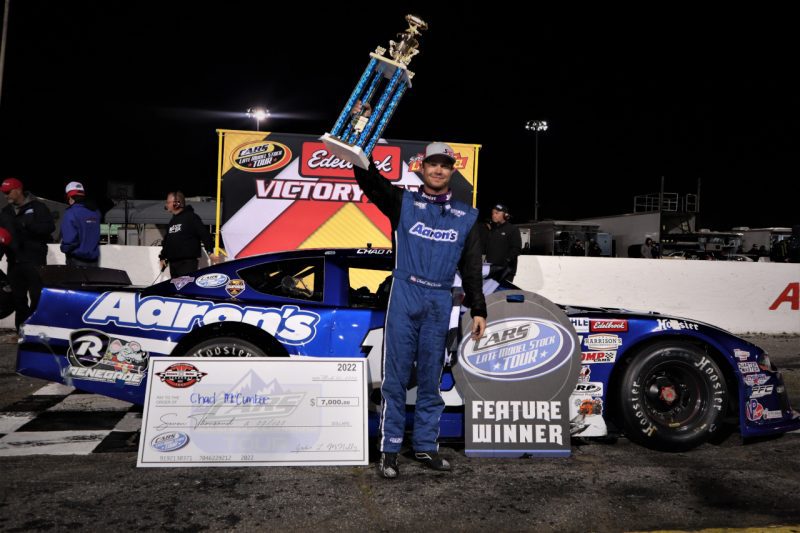 Chad McCumbee and William Sawalich, who were victorious in the Late Model Stock and Pro Late Model features respectively, also claimed poles ahead of Saturday’s on-track action and both had to survive strong challenges in the closing laps.

The similarities between the two end there, as Sawalich’s career is only just beginning in full-bodied stock cars, while McCumbee’s extensive auto racing background includes experience in all three of NASCAR’s top levels along with a championship in the Continental Tire SportsCar Challenge.

Despite having plenty of success in Late Model Stock competition such as a victory in the Myrtle Beach 400 back in 2018, a CARS Tour victory had always eluded Chad McCumbee since making his first start back in 2015.

McCumbee utilized his experience at the abrasive Myrtle Beach to properly save his tires from the pole position, which allowed him to take advantage of late contact between Carson Kvapil and Layne Riggs so he could finally break through for that elusive first victory.

“It came down to the evolution of the racetrack tonight,” McCumbee said. “[The sealer] started coming up off the bottom and that really helped the top on restarts. Our car needed laps and every restart it took us a couple of laps to get going. When we were positioned on the inside, it just wasn’t advantageous for us but the [sealer] helped me get that momentum up top.”

After leading the first 80 laps with minimal issues, McCumbee was fully expecting to lose the lead once the fast cars stopped being conservative.

Riggs was the first one to overtake McCumbee on a restart with 49 laps remaining by powering past him on the top side. McCumbee would then get blocked by Conner Jones a couple of restarts later, enabling Kvapil to pass him for second and set his sights on Riggs up front.

The two talented young drivers engaged in a fierce battle for the lead until Kvapil made slight contact with Riggs while trying to block him off Turn 4. This gave McCumbee the opening he needed to re-take the lead and pull away during the closing laps.

“That was good hard racing,” McCumbee said. “These guys [at McCumbee-Elliott Racing] were the ones that kept me in it. I thought we were done but as those long runs progressed, I realized that were still in contention, so I have to thank the good Lord for getting us here and hopefully we can keep this momentum going.”

Layne Riggs, Carson Kvapil Come Up Short of a Win

Layne Riggs was hoping that he would come out on the positive end of his hard-fought battle with Carson Kvapil and Chad McCumbee for the win at Hickory.

Despite expressing some disappointment over his third-place finish, Riggs had more positives than negatives to take away from Saturday evening and credited McCumbee for executing the tire conservation strategy better than everyone else.

“I just needed a little bit of a better car,” Riggs said. “Chad [McCumbee] ran a smart race and saved a little bit more than we did. We were bumping and grinding on that last restart and got pushed into the wall a bit. I hated that but this was a great run for us, our car is one piece, and the program is getting a lot better.”

Kvapil was doing everything possible to engage in a clean, competitive race with both Riggs and McCumbee but admitted that qualifying ultimately determined which of the three would celebrate at the end of the night.

Simultaneously saving tires while trying to pass other cars from the middle of the field proved to be a very difficult task for Kvapil. While his car was strong enough to briefly hold the lead, Kvapil said there was nothing he could do once McCumbee passed him with 20 laps to go.

“We were really done there at the end,” Kvapil said. “I thought we were in good shape near the end of the race but I started 13th and Chad [McCumbee] was on the front row. Passing 12 extra people than he did just killed the tires. I didn’t mean to get into Riggs but we had a fast car. We just didn’t have enough at the end.”

The second-place finish did serve to pad Kvapil’s lead over the rest of the CARS Late Model Stock Car Tour field after he opened the 2022 season by taking home a $30,000 paycheck in the Old North State Nationals at Caraway Speedway.

For Riggs, finishing third at Hickory erased the sting of crashing out early at Caraway. He is confident that his program is currently heading in the right direction and fully expects to add more CARS Late Model Stock Car Tour victories to his resume before 2022 concludes.

“We needed a result like this,” Riggs said. “After sweeping last weekend at South Boston [Speedway], I felt like we learned so much there and we tried to transfer what we learned over to Hickory even though they are two different tracks. I’m glad to be racing with the CARS Tour and hopefully we’ll be able to this again soon.”

While Chad McCumbee, Carson Kvapil and Layne Riggs fought over the win, William Sawalich successfully kept his car out of trouble to finish fourth in his CARS Late Model Stock Car Tour debut.

Just a couple of hours earlier, Sawalich had to hold off a hard charge from Caden Kvapil at the end of the 100-lap CARS Pro Late Model Tour feature to register his first career victory driving a car prepared by Dennis and Brandon Setzer.

“I have to credit all of my guys,” Sawalich said. “While it certainly wasn’t easy, everything was compliant. It was awesome to get my first CARS Tour win at Hickory since this place is so special to Brandon and Dennis Setzer. I just can’t wait for the other races to come.”

With Dennis being a two-time Hickory track champion and Brandon having won a couple of CARS Super Late Model Tour races at the facility himself, Sawalich knew he was in good hands when his car was unloaded for the Tuff Shed 250.

Spending time with the Sezters allowed Sawalich to thoroughly understand all the intricacies of putting together a complete race at Hickory. Sawalich put that knowledge to good use by maintaining a lead that went uncontested for most of the 100 laps.

Sawalich nearly saw his stellar outing come to an end when Kvapil hit his left rear quarter-panel with less than 50 laps remaining. The contact did not hinder the performance of Sawalich’s car and he managed to keep the lead all the way until the checkered flag.

“I asked my team if I had any damage and they said I was good,” Sawalich said. “I’m not really sure what happened and I’m sorry if it was my fault, but I thought it was just a racing incident.”

McCumbee Happy to be Back in the CARS Tour

The competition offered by the CARS Tour was one of the main reasons why McCumbee chose to return to the series in 2022 as a member of the Touring 12, adding that his battle with Carson Kvapil and Layne Riggs was exactly how he envisioned the first victory playing out.

“None of these guys make mistakes,” McCumbee said. “This series is really impressive when it comes to depth and you have to capitalize on every opportunity. That’s what we did at the end and there wasn’t going to be another one unless I moved somebody. I don’t want to race like that, nor do I want to be raced like that.”

While McCumbee has faith in his program, he knows consistency and patience are two qualities that will be imperative if he wants to unseat Bobby McCarty as the champion of the CARS Late Model Stock Car Tour at the end of the year.

For more information on the CARS Late Model Stock Tour and the CARS Pro Late Model Tour, visit www.carsracingtour.com. Be sure to stay active and social with the tour by liking “CARS Tour” on Facebook, following @CARSTour on Twitter and scrolling through photos on Instagram cars_tour.
Additional series information can be obtained by calling the CARS Tour series office, located in
Mooresville, NC, at 704.662.9212.