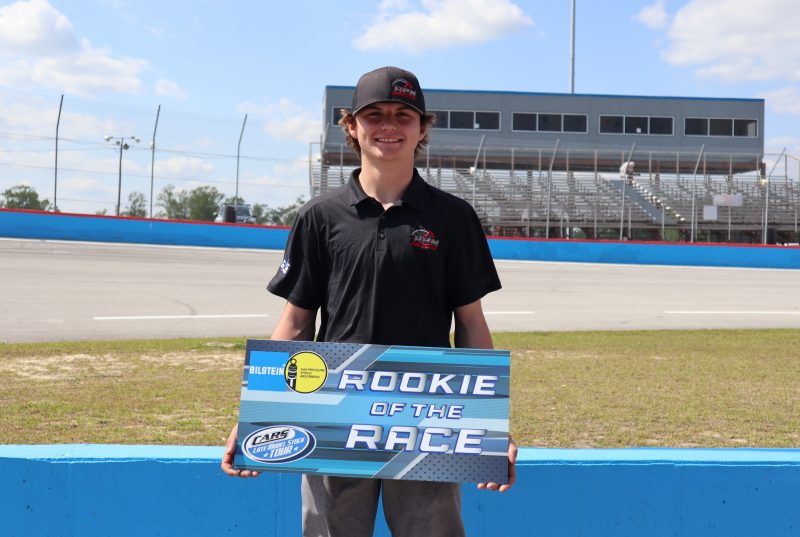 Five race weekends into the 2022 Solid Rock Carriers CARS Tour season and there is no definitive front runner in either Rookie of the Year points battle.

Carter Langley only holds a four-point advantage over Chase Burrow in the Bilstein CARS Late Model Stock Car rookie standings, while Luke Fenhaus, who is also the overall points leader in the CARS Pro Late Model Tour, maintains a five-point lead over Caden Kvapil in the MPM Marketing rookie standings.

One advantage that Kvapil and fellow rookie William Sawalich have over Fenhaus is that each of them have visited victory lane in the Pro Late Model Tour. All the Late Model Stock Car rookies remain winless in 2022.

A diverse set of tracks remain on the schedule for the Rookie of the Year contenders in each CARS Tour division, all while Langley and Fenhaus have a small margin of error to work with as they try to build consistency heading into the summer months.

Yet the Zebulon, North Carolina native has been far from satisfied with how his debut campaign in the series has transpired, but Langley is optimistic that he can establish consistency over the second half of the season following disappointing showings at Goodyear All-American Speedway and Franklin County Speedway.

“It’s really been an up and down season,” Langley said. “We were running pretty good in those first couple of races and I was hoping to get a Top 5 by now, but ever since Goodyear, bad luck has been on our side with motor and brake problems. Hopefully we’ve got those issues fixed.”

Langley has been able to fight his way to the front of a talented rookie class in the CARS Late Model Stock Car Tour despite moving back to his family-owned operation from Justin Johnson Racing earlier this year.

The transition has not been a jarring one for Langley. He has been happy with the speed his own cars have shown in practice but is still looking to put together a complete race that will finally yield him a Top 5 finish.

Langley is counting on that speed to stay ahead of the other CARS Late Model Stock Car Tour rookies that include Chase Burrow, who sits second in the Bilstein ROTY standings after originally planning to just run the Old North State Nationals at Caraway Speedway as a replacement for Rusty Skewes.

Burrow has been pleasantly surprised by how fast he has been so far this year but admitted that his three Top 10s would not have been possible without car owner Chris Edwards and all of the crew members that have meticulously worked to keep him competitive in each race.

“You have to have a good team behind you,” Burrow said. “The car has to be great, and you need a good motor, but this is a team sport and there are a lot of guys no one sees that deserve all the credit. I wouldn’t be able to do what I’m doing right now without the guys who are helping me out.”

Burrow feels like the next two venues on the CARS Late Model Stock Car Tour schedule in Langley Speedway and Dominion Raceway present a hometown advantage that he hopes will give him the momentum to propel past Langley in the Bilstein ROTY standings.

Langley expects Burrow and the rest of the CARS Late Model Stock Car Tour rookie class to relentlessly challenge him all year long, but he feels confident in his ability to put together consistent finishes and add a ROTY title to his growing resume.

The two most efficient drivers in the CARS Pro Late Model Tour this year have been Luke Fenhaus and Caden Kvapil.

Not only are the two leading the MPM Marketing Rookie of the Year standings, but they are both atop the overall CARS Pro Late Model Tour standings, with Fenhaus having a small advantage over Kvapil in both categories.

“I think we’re off to a good start,” Fenhaus said. “We’ve had up and downs, but you have to battle through those. The main parts of racing for a championship are being consistent and having good qualifying efforts. We’re working as a team to get better and hopefully we’ll get that first win soon.”

Fenhaus brings a diverse resume to the CARS Pro Late Model Tour as a rookie. His accomplishments including a victory in the Slinger Nationals last year, which subsequently led to an appearance at Slinger Speedway for the Superstar Racing Experience.

Expectations were high for Fenhaus when he elected to run the CARS Pro Late Model Tour with Highlands Motorsports. He added that transitioning from a Super Later Model to a Pro Late Model was not too challenging but admitted that the on-track competition has made him work for every single position.

Kvapil has been the primary opponent for Fenhaus through the first four CARS Pro Late Model Tour races. In the debut race for the series at Caraway Speedway this year, Kvapil denied Fenhaus his first victory by passing him on a late restart with 12 laps remaining.

Kvapil wanted to make sure he was thoroughly prepared for his rookie season in the CARS Pro Late Model Tour and has been heavily relying on his older brother Carson, who piloted their family-owned car to a CARS Super Late Model Tour championship last season.

“[Carson] has been a big help for me,” Kvapil said. “He ran Supers and I’m running in Pros now, so it’s pretty much the same thing except for the Pros being slower with a smaller motor. He’s taken a lot of the stuff he learned in Supers and is passing it to me.”

The 2022 season for Kvapil has been about learning and developing the right mentality come race weekends. He has been proud of the progress made in the CARS Pro Late Model Tour this year and hopes to join Carson as a champion once the season ends.

Kvapil only lost the overall points and MPM Marketing ROTY standings advantages to Fenhaus after suffering a mechanical failure in the closing laps at Franklin County. Fenhaus himself enjoyed a dominant performance in the same event but once again missed out on his first win after being passed on the last lap by Ryan Moore.

The near misses at Caraway and Franklin County have only given Fenhaus more motivation to find Victory Lane and win a CARS Pro Late Model Tour championship, but he fully anticipates battling Kvapil all the way until the season finale at Caraway on Nov. 5.

“Caden has been really good so far,” Fenhaus said. “He’s been in contention to win during every race and those guys will be tough to beat for sure. We just have to stay on top of our stuff because Caden will be good every race. The plan is to go into the next one, grab a win and boost our momentum moving forward.”

No clear advantage exists between Kvapil and Fenhaus, but MPM Marketing founder Tonya McCallister said the respect and competitive nature displayed between the two is exactly why she wanted to sponsor the fight for ROTY honors when the CARS Pro Late Model Tour was formed.

“The rookie talent this year is phenomenal,” McCallister said. “Each and every week is a battle and this inaugural season for [the CARS Pro Late Model Tour] is different because everyone is technically a rookie. [Luke] Fenhaus is an experienced racer and Kvapil is a young, up and coming talent. It is exciting to see the variety of talent competing each week and we are happy to be a part of it.”