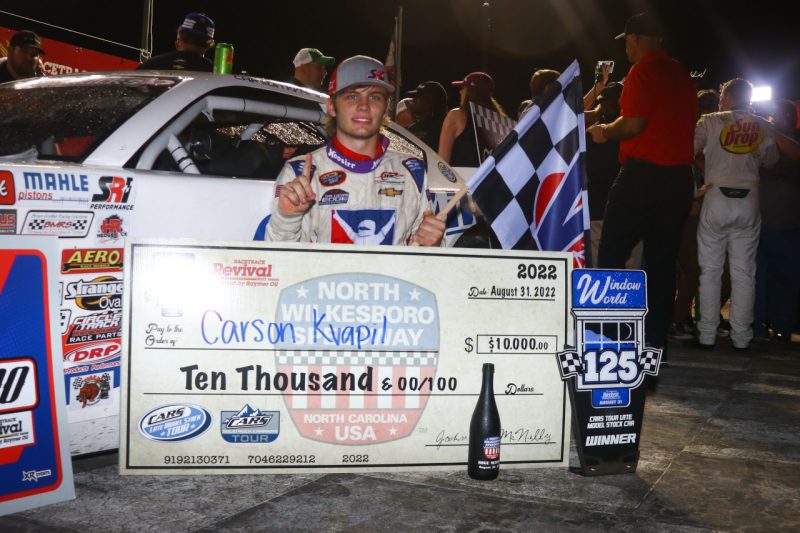 Carson Kvapil, who came into Wednesday’s Window World 125 with a 37-point lead, maintained track position at the front of the field all evening and claimed his third victory of the 2022 season, all while his Hall of Fame boss Dale Earnhardt Jr. wowed the sold-out crowd with a vintage performance that saw him come home third.

Earnhardt Jr. was one of the first to greet Kvapil after he rode the elevator up to North Wilkesboro’s victory lane, simultaneously elated over the accomplishment of his young driver and that months of planning and preparation into reviving North Wilkesboro turned out to be a complete success.

The significance of Kvapil’s win was not lost on him as he celebrated with Earnhardt Jr. and his entire crew.

Like nearly everyone else in the industry, Kvapil was thrilled when he heard that racing would return to North Wilkesboro in August, but he did not initially believe he would be the first to obtain a Late Model Stock victory at the facility since its reopening.

Nor did he expect the moment to take place in front of the largest crowd Kvapil has seen in a short track event during his career.

“Just having cars on track [at North Wilkesboro] is huge,” Kvapil said. “It’s been over 10 years and it was even longer for Dale. Everyone wanted this place back and we got it back for them. This is one of the biggest races of the year, so winning in front of all these fans is huge.”

Kvapil commended JR Motorsports for putting together a perfect car that allowed him to run at his own pace all evening. He briefly surrendered the lead to Mini Tyrrell and Jacob Heafner to save his tires before quickly resuming control.

Despite this, a late caution for Connor Mosack’s spin in Turn 2 meant that Kvapil would need one more restart to fend off the second place car of Mason Diaz and Earnhardt Jr., the latter of whom was running some of the fastest laps on track before the yellow was displayed.

Even though Earnhardt Jr. was faster on the longer run, Kvapil’s most pressing concern was fending off Diaz for the two-lap shootout. He knew Diaz would be aggressive in trying to pass him for the win but appreciated that Diaz did not try to deliberately move him out of the way.

“I was a little bit worried about Mason,” Kvapil said. “I knew he was going to get to my back bumper in the center of the corner and I felt I was a little weak there in Turns 1 and 2. He got my left rear a little bit, but he raced me clean, and I’ll remember that for next time.”

The fight for the win took place out the windshield of Earnhardt Jr., who has been one of the most significant components of North Wilkesboro’s resurgence since the beginning.

From getting the track scanned for iRacing to hosting two Q&A sessions on Tuesday and Wednesday, the two-time Daytona 500 champion worked tirelessly to ensure that everyone in the motorsports industry knew every little detail about what was taking place at North Wilkesboro at the end of August.

Now that the Window World 125 has come and gone, Earnhardt Jr. was ready to return to his normal broadcasting duties at NBC Sports but admitted that enjoyed every moment of the festivities on Tuesday and Wednesday.

“I’ve worked my guts out for two days and I am gassed,” Earnhardt Jr. said. “A while back, I made a lot of promises on what I could contribute to the event. We were busy, and I don’t know if I can do something this big again. I don’t like being the middle of attention because it’s not very comfortable for me.”

Wednesday’s 125-lap feature was the first time Earnhardt Jr. had been in a Late Model Stock since 1997.

Driving a car that honored the Sun Drop colors he used in Late Model Stock competition during the early 1990s, Earnhardt Jr. showed the fans and the current generation of drivers that he was still capable of winning races, as he methodically worked his way through the field during the closing laps to settle for third.

Earnhardt Jr. does not intend for the Window World 125 to be his last foray into Late Model Stock racing. He is considering running one of the crown jewel events at the end of the year but has not ruled out potentially showing up unannounced to a regularly weekly race in the future.

“[The Thanksgiving Classic] is something I could run,” Earnhardt Jr. said. “I was looking at the schedule weeks ago, and I might run [the South Carolina 400] or maybe both of those. I’m definitely going to race a couple of times next year at somewhere like Florence [Motor Speedway] on a Friday night and not tell anybody. We’ll just show up, but something like this will be difficult to do again.”

While Kvapil and Earnhardt Jr. celebrated in victory lane, Diaz was left to ponder over narrowly missing out on his first CARS LMSC Tour victory.

Diaz found himself in a perfect position to overtake Kvapil by lining up to his outside on the green-white-checkered attempt. While he admitted to slightly overdriving the corner, he said having to fight his way up through the field put enough strain on the tires to hinder his car at the end of the night.

“It was a challenging day for sure,” Diaz said. “Starting 20th kind of hurt us. Saving tires was not an issue for us but going through the field while saving tires was a struggle. If we saved a little bit more left rear tire, that would have given us the drive we needed at the end of the race.”

Although he was disappointed by coming up one spot short of a win, Diaz said the performance of his car in Wednesday’s Window World 125 highlights the progress he and Mike Darne Racing continue to make with each week.

Diaz’ second at North Wilkesboro matched the career best finish he obtained in last year’s Throwback 276 at Hickory Motor Speedway. He felt the strategy was perfect for him to potentially break through for his first career victory at North Wilkesboro but said that Kvapil easily had the best car of anyone in the field.

With only a handful of races remaining on the year, Diaz is confident that he can finish out the year strong by visiting victory lane in the LMSC Tour while also adding his name to the list of notable drivers who have won the Virginia Late Model Triple Crown.

“We’ve got Tri-County next week for the CARS Tour and then it’s on to Martinsville,” Diaz said. “We’re tied for first with Mark Wertz in the Virginia Triple Crown, so hopefully we can keep our necks down and keep fighting.”

Kvapil’s victory at North Wilkesboro further solidified the sturdy points lead he held over Connor Hall and Kaden Honeycutt. He feels confident about adding an LMSC Tour title to his resume one year after claiming the final CARS SLM Tour championship, but stressed that he and JR Motorsports need to maintain their status quo of efficiency.

“We’re here to win,” Kvapil said. “Getting the championship comes with that, but we’re focused on winning races and running consistently.”

Kvapil will look to keep his momentum going when the LMSC Tour heads to Tri-County Motor Speedway on Sept. 10.