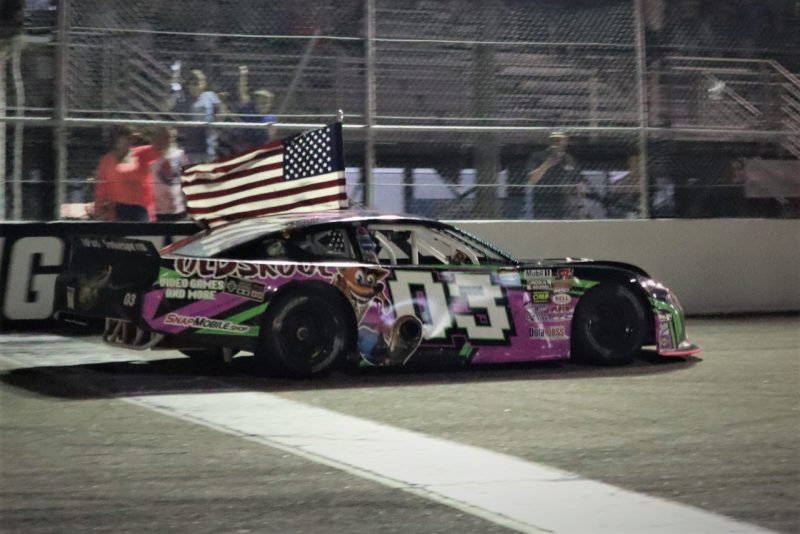 Brenden Queen kept his perfect season at Langley Speedway alive in thrilling fashion during the Visit Hampton.com 125 on Saturday evening.

Entering the evening having won all three weekly events at his home track, Queen needed a late-race restart to challenge CARS Late Model Stock Car Tour points leader Carson Kvapil for the win before muscling him out of the way on the last lap, much to the delight of the loyal Langley fanbase.

The maneuver gave Queen his first career CARS Late Model Stock Car Tour victory in just his second appearance in the series, with his other start also taking place at Langley back in 2019.

Since beginning his Late Model Stock Car career, Brenden Queen had always dreamed of one day taking home a checkered in the CARS Tour.

Queen had previously accomplished his goals of winning a track championship at Langley Speedway and the facility’s most prestigious race in the Hampton Heat, but he admitted that adding a CARS Tour victory carried extra catharsis knowing that he defeated many of the best Late Model Stock Car drivers in the country.

“This is as big as the Hampton Heat,” Queen said. “These guys are the best of the best and I’ve dreamed of racing in this series for so many years. I haven’t had the budget to do it and working full-time kind of messed up my racing plans, but this is why you have to come and win these races because this is where all the eyes are at.”

The path to victory lane was an adventurous one for Queen, who had to briefly leave Langley and make repairs to his No. 03 Oldskool Video Games Toyota after suffering an oil leak in practice on Friday afternoon.

Queen rebounded from the mechanical failure to qualify third for the VisitHampton.com 125, but elected to conserve his equipment and fall back during the early laps. As the finish drew closer, Queen proceeded to pick off the competition one spot at a time before finally reaching the second position behind Carson Kvapil.

The final caution for a spin from Hayden Swank gave Queen the opening he needed to challenge Kvapil during the final shootout. Despite the opportunity, Queen still was not sure if he had a car strong enough to overtake Kvapil and knew he had to be aggressive coming to the white flag.

“I didn’t think I would get [Kvapil],” Queen said. “He was really good and I hope he ain’t mad at me. It was for the win and you have to do what you have to do. I stuck with the gameplan and I knew it was going to work. The cautions came out at the right time.”

For most of Saturday’s VisitHampton.com 125 on Saturday, Carson Kvapil was confident that he would pick up his third CARS Late Model Stock Car Tour victory of the season at Langley Speedway.

Kvapil controlled most of the race from the pole position and had a comfortable gap over Queen before Swank’s spin brought out the caution, which left him in a vulnerable position as he tried to hold the lead with worn tires.

“I didn’t want to drop back,” Kvapil said. “I felt that I would have dropped way too far back and I though the pace we were going wasn’t too fast. There were a few laps that I thought we were going a little too hard but everybody was in that little group of ours. We just didn’t have enough there on that last run.”

Momentum was on Kvapil’s side ahead of the VisitHampton.com 125 at Langley, as the two victories and five consecutive Top 5s had given him a dominant 27-point advantage in the CARS Late Model Stock Car Tour standings.

Despite this, Kvapil had no idea on what to expect out of Langley in his first trip there, but he heavily leaned on the advice of his mentor Josh Berry during the weekend, whose accomplishments at the facility include a victory in the Hampton Heat last year.

Although his dominant performance failed to translate into a win, Kvapil said there were plenty of positive takeaways from competing at Langley and plans to apply the knowledge from Saturday towards building upon his consistent debut CARS Late Model Stock Car Tour season.

“Obviously leading most of the race and coming up second sucks, but racing is like that,” Kvapil said. “With this being my first time here, I didn’t think I was going to be in the Top 10 during qualifying, so I’m coming out of here with a pretty positive outlook.”

A quiet but consistent season in the CARS Late Model Stock Car Tour continued for Chad McCumbee on Saturday night.

The veteran driver maintained solid track position through the entirety of the VisitHampton.com 125 at Langley Speedway and managed to briefly take the lead away. Although McCumbee ultimately finished third, he was more than satisfied with the performance of his No. 16 Aaron’s Sales & Lease Ford.

“I didn’t think we had quite what we needed,” McCumbee said. “The strengths we built on in practice helped us stay where we were, but we needed just a little bit more turn [on Saturday]. We haven’t been quite where we needed to be since winning Hickory but hopefully this performance gets us there.”

For McCumbee, Saturday proved to be another near miss for him at Langley.

During the 2021 Hampton Heat, McCumbee had the strongest car all evening and was in the middle of holding off Josh Berry for the lead when a mechanical failure brought his stellar evening to an unexpected and disappointing ending.

The sting from that defeat remains with McCumbee, who believed his car on Saturday was strong enough to get him to victory lane at Langley. Despite not getting the win, McCumbee said that his third place showing displayed the consistency of his program, which he knows will be needed if he wants to chase down Kvapil in the point standings.

“I needed to run a little bit harder and get by myself so I could run my pace how I needed to,” McCumbee said. “That’s something you learn from racing at some wore out places in South Carolina, but I’m glad to lead some laps and get some points. I wanted to really capitalize on this race after last year’s Hampton Heat but this was a good way to rebound from that.”

The next race up for the CARS Late Model Stock Car Tour will be on Father’s Day weekend at Dominion Raceway on June 18. The CARS Pro Late Model Tour will not return to action until June 25 when they head to Tri-County Motor Speedway.